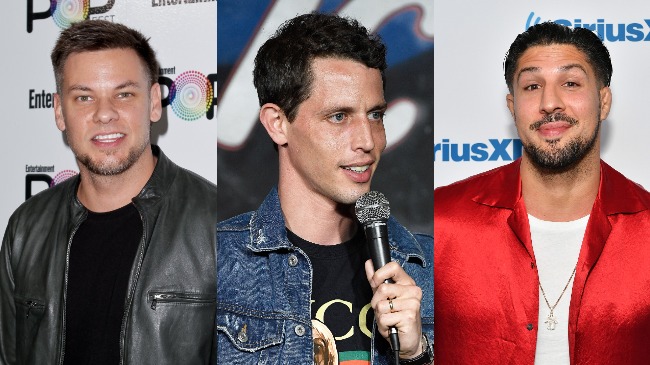 Tony Hinchcliffe reportedly was dropped by his talent agency and two live appearances with Joe Rogan after comedian Peng Dang posted a video of Hinchcliffe making anti-Asian jokes at his expense directly after Peng served as his opener.

WME Entertainment “parted ways” with Hinchcliffe the day after Peng, a Chinese-American, posted a portion of the clip to Twitter, using the descriptor ‘Happy Asian (AAPI) Heritage Month!’

Hinchcliffe, who’s written for the Comedy Central Roast series, began his set by referring to Peng Dang as a “filthy little f—ing ch–k” before launching into an exaggerated Asian accent and berating the audience for laughing at Dang’s material, much of which was on the topic of the rise in anti-Asian hate.

Last week in Austin, I got to bring up Tony Hinchcliffe. This is what he said. Happy Asian (AAPI) Heritage Month! pic.twitter.com/9XG6upit2a

Dang tells USA TODAY he is still “shocked” by Hinchcliffe’s words and sharing the video was “the right thing to do.”

“Tony never came up to me, talked to me or apologized. I don’t think he thinks that was offensive,” Dang says.

On their King and the Sting podcast, Theo Von and Brendan Schaub discussed the incident and where the line in comedy gets drawn, if anywhere.

“I’m not going to say that Tony’s the funniest guy in the world to me, but his thing is saying abusive and messed up sh*t,” says Von. Schaub agrees that Tony’s brand of comedy is “savage” and “below the belt,” saying that it’s “not for everybody” and “wasn’t meant to be blasted to the masses.” [Dexerto]

While they said the video itself should never have been recorded or shared on the internet, they agree that the jokes simply “weren’t funny.”

The pair then consulted their Asian podcast producer Jim for his take.

“It just wasn’t funny. If it was funny it would be different. It was easy jokes, like soy sauce? Come on.”

Jim claimed he believes Tony deserves a second chance, while also claiming the biggest breach was filming and publicizing a bit that may have not been fleshed out yet.

Others comics weren’t as empathetic toward Hinchcliffe.

To paraphrase Richard Pryor: “Nothing is off-limits, a comedian can say whatever they want — but it better be funny.”

Nothing about that was funny.

That was just racism with a microphone and stage and nothing else. I’m really sorry.

It’s so funny that these type of guys always talk about the brotherhood of comedy and shit and then go up and shit all over somebody they’re performing with? Like the main problem is obviously the racism but talking about another comic like that is so fucking rude + hypocritical

You can catch the whole set here: