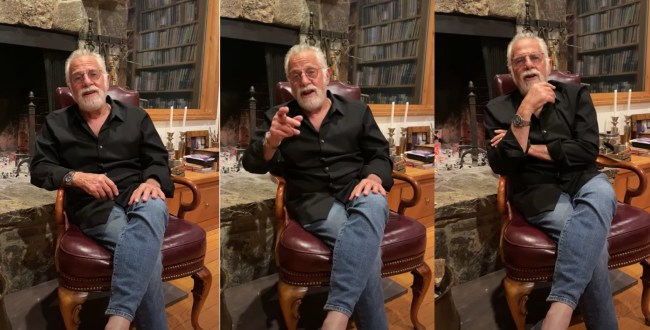 A couple years ago, when all of us here at BroBible lived in NYC, Cass, Matt, and myself went to a party in FiDi hosted by Dos Equis where we got to meet Jonathan Goldsmith, aka “Most Interesting Man In The World.” We drank a lot of beer and ended up at a sports bar watching Rhona Rousey lose to Holly Holm, the beginning of the end of her meteoric rise in the UFC ranks at the time.

Jonathan Goldsmith’s story is super fascinating – Before the spots that made him a household staple, he was an actor at the end of his career, struggling with homelessness. He nailed the audition for the Dos Equis commercials and his beard became one of the most legendary beards of our time.

Dos Equis retired The Most Interesting Man In The World a couple years ago after a five year run. But he still puts that beard to good use. For example, he’s teaming up our friends at Live Bearded and a beard club called the Vermont Beardies to raise money for the Make-A-Wish foundation.

The Live Bearded brotherhood has joined the 5th annual Vermont Beardies to help benefit the Make-A-Wish Foundation. All funds raised towards granting wishes for children fighting life-threatening illnesses and we want to help! Please join us in supporting some incredibly brave and courageous kids so we can help make their wishes come true.

His beard is looking glorious too – He recorded this video and kicked it over to Live Bearded.

Related: This Three-Step Process Is The SECRET To A Healthy Beard

If you’re down and feeling like participating, in the spirit of a well-kept beard and a good time, go check out the Go Fund Me donation page and chip in a couple dollars – they’re really, really close to the $10,000 goal.