In Shocking News, Thomas Middleditch And His Attractive Wife, Who Were Swingers, Have Split Up 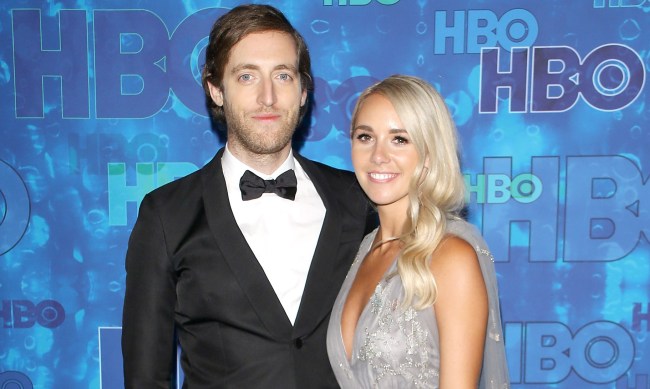 Thomas Middleditch and his wife Mollie, who in 2019 admitted to be swingers (he sounded significantly more into it than her), have decided to get a divorce. Shocking.

Middleditch, star of numerous Verizon Wireless commercials, and HBO’s Silicon Valley, and his wife Mollie Gates, a costume designer, were married for over four years.

The divorce papers were filed on May 28 by Gates and cited irreconcilable differences as the reason for the split. The filing came just six days after the claimed date of separation of May 22, reports People. She is asking for spousal support.

Last September, Middleditch did an interview with Playboy in which he revealed that he and Mollie were swingers. Or well, he was, and she also participated.

“Only after I got married was I like, ‘Mollie, I’m sorry, but we have to get nontraditional here.’ To her credit, instead of saying ‘F**k you, I’m out,’ she was like, ‘Let’s figure this out,’” Middleditch admitted. “To be honest, swinging has saved our marriage. We have different speeds, and we argue over it constantly, but it’s better than feeling unheard and alone and that you have to scurry in the shadows.”

Middleditch also added during the Playboy interview that he is the “gas, and she’s brakes” when it comes to swinging. Hmmm… wonder why?

He also admitted that he is into involving fans of his, while Mollie was not so interested.

“That’s one of the trickier elements of it all, because Mollie doesn’t get that and yet she has to witness it,” said Middleditch. “I’m like, ‘Come on, what about this chick who’s obviously really into me?’ And Mollie will say, ‘Yeah, she’s into you. Where do I fit in?’ That question comes up.”

“It’s a game of inches on a minefield to try to predict who’s going to feel safe,” he concludes. “My first concern is Mollie. Anything that happens has to be run by the queen.”

Turns out that by April of 2020, Middleditch was already regretting making all of those statements.

“To be honest, it’s a thing I wish I could take back. It was poor execution. But I’ve learned to keep things a little more close to the chest,” he told The Last Laugh podcast. “ It was a painful [learning experience], to be honest.”

And now he’s going to be single so I guess he will be able to bang all of those “chicks” who are “really into” him. That has to be a lengthy list, don’t you think?