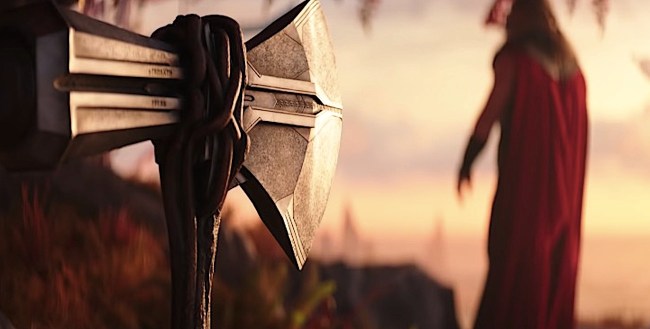 After dropping a rather basic teaser trailer to appease fans a few weeks back, Marvel Studios released the first proper trailer for Thor: Love and Thunder during Game 4 of the NBA’s Eastern Conference Finals between the Boston Celtics and Miami Heat on Monday night. The trailer features the first look at Oscar winner Christian Bale as the film’s main villain, Gorr the God Butcher.

With the release of Thor: Love and Thunder on July 8, Chris Hemsworth will become the first actor in the history of the Marvel Cinematic Universe films, which is a feat that the likes of Robert Downey Jr. and Chris Evans didn’t even accomplish.

The 38-year-old Australian actor previously starred in 2011’s Thor, 2013’s Thor: The Dark World, and 2017’s Taika Waititi-directed Thor: Ragnarok, which revitalized both the franchise and the character within the MCU, as Thor would also have a key dramatic role in both Avengers: Infinity War and Avengers: Endgame.

In addition to Hemsworth’s God of Thunder, Thor: Love and Thunder — the second MCU film of 2022 following Doctor Strange in the Multiverse of Madness — stars Natalie Portman, who will take on the mantle of the Mighty Thor, Christian Bale as the film’s villain Gorr the God Butcher, Russell Crowe as Zeus, and returning MCU stars Tessa Thomspon, Chris Pratt, Dave Bautista, Pom Klementieff, Karen Gillan, Jeff Goldblum, and Taika Waititi.

In addition to Multiverse of Madness and Love and Thunder, Marvel Studios will also release Black Panther: Wakanda Forever later this year.