The First Official Trailer For ‘Thor: Love And Thunder’ Is Finally Here 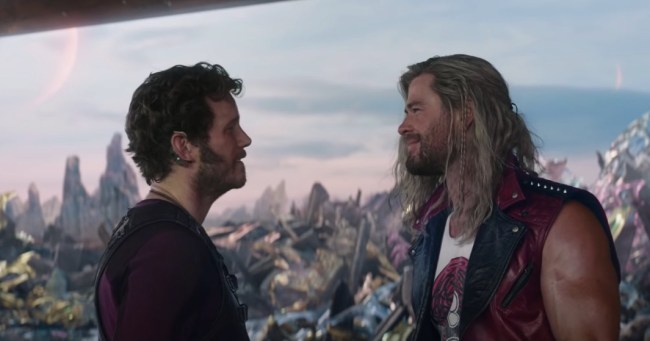 The first official trailer for Thor: Love and Thunder has finally been released. The film, which stars Chris Hemsworth as the God of Thunder, hits theaters on July 8. Check out the first teaser for the film below.

Directed by Oscar-winner Taika Waititi, who previously helmed 2018’s Thor: Ragnarok, Thor: Love and Thunder stars Chris Hemsworth, Tessa Thomspon, Christian Bale, Natalie Portman, Chris Pratt, Dave Bautista, Pom Klementieff, Karen Gillan, Jeff Goldblum, and Russell Crowe. Matt Damon and Melissa McCarthy are also set to have cameos in the film. It will be the second MCU film of the year following Doctor Strange in the Multiverse of Madness, which releases on May 6.

The film marks the culmination of a remarkable turnaround for the character in the MCU. After the first two films were considered among the franchise’s worst, the third film is widely considered to be one of the MCU’s best, with the Thor character also doing tons of heavy lifting in both Avengers: Infinity War and Avengers Endgame. Now, Hemsworth’s God of Thunder has become the first hero in the history of the MCU to star in a fourth solo film.

Finally, and perhaps most important, it should be noted that while the trailer did show off a first-look at Natalie Portman as The Mighty Thor, Christian Bale’s Gorr the God Butcher, who is the film’s main antagonist, was not featured.