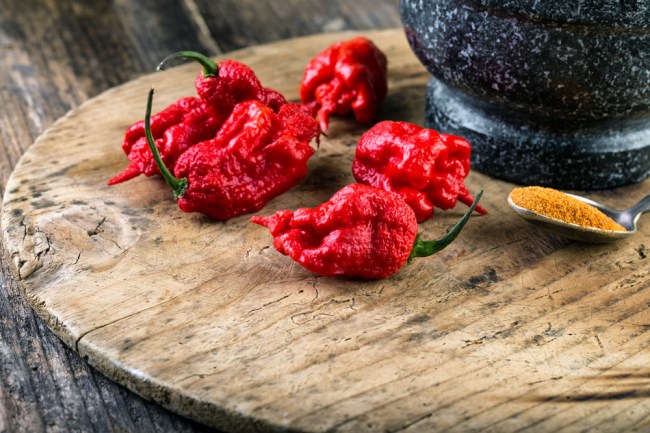 In 2013, Guinness World Records named the Carolina Reaper the hottest pepper in the world. The Carolina Reaper was bred to be fiery pepper of death and destruction because it is a hybrid between Sweet Habanero and Naga Viper chilies. The Carolina Reaper has a mouth-melting 1,569,300 Scoville Heat Units (SHU) and broke the record again in 2017 by registering 1,641,183 SHUs. For comparison, spicy jalapeños have a range of 2,500 and 8,000 SHUs. Some maniac actually ate a Carolina Reaper. Ill-advised. He suffered so much excruciating pain that he was rushed to the hospital.

A 34-year-old man from New York was competing in a hot pepper eating contest and consumed a blazing Carolina Reaper. Besides melting his tongue, the man also suffered from a series of “thunderclap” headaches, which is a severe headache that lasts only a few seconds or minutes. The pain was so intense in his neck and skull that the man was rushed to the emergency room. Over the next few days, he experienced more thunderclap headaches.

Doctors ran a series of tests on the man including an MRI and CT scan. The doctors at the Bassett Medical Center, Cooperstown New York, found that a few blood vessels in the man’s brain actually changed. Because of the Hellishly hot chillies, sections of his internal, middle, and posterior cerebral arteries became more narrow. The medical findings were reported in the British Medical Journal.

The man’s system was completely clean and he was in good health besides the searing hot chillies melting his innards. Doctors believe that the thunderclap headaches were caused by the Carolina Reaper pepper that actually altered the man’s blood vessels in what medical professionals call “reversible cerebral vasoconstriction syndrome (RCVS),” a rare cerebrovascular condition caused by tightening of blood vessels in the brain. “Given the development of symptoms immediately after exposure to a known vasoactive substance, it is plausible that our patient had RCVS secondary to the Carolina Reaper,” the researchers concluded.

After a few days, the thunderclap headaches stopped. Five weeks after the hot pepper eating contest, the man’s arteries had returned to their normal size. The moral of the story is to not eat Carolina Reapers. Ever. Ever. Ever. But you don’t have to take my word for it, enjoy these four people destroying their mouths after eating Carolina Reapers.