T.I. Takes His 18-Year-Old Daughter To The Gynecologist Every Year To Make Sure She’s Still A Virgin 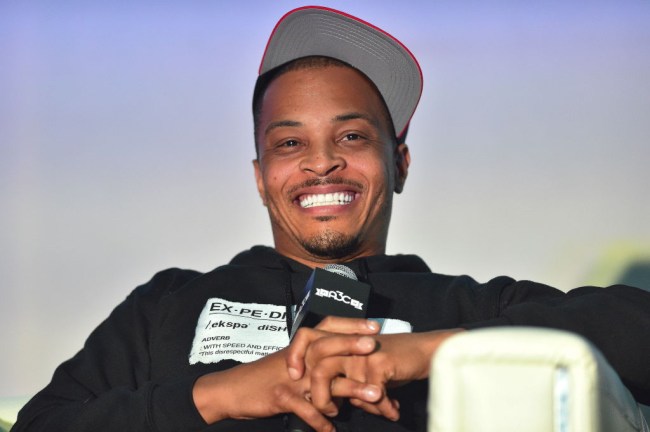 Rapper T.I. revealed some interesting news about his parenting methods. The Atlanta rapper told the world that he takes his daughter to the gynecologist every year to make sure that she is still a virgin.

T.I. appeared on the Ladies Like Us podcast where he divulged that he accompanies his 18-year-old daughter to her yearly gynecologist visit. Speaking to the podcast’s hosts Nazanin Mandi and Nadia Moham, T.I. said confessed that he has the doctor check to see if his daughter’s hymen is still intact.

“I think that most kids in hindsight, looking back, they always thank their parents for not allowing them to damage themselves as much as they could have,” T.I. said.

T.I., whose real name is Clifford Joseph Harris, Jr., was asked if he talked to his children about the “birds and the bees.” “Have I? This is the thing. Deyjah’s 18, just graduated high school now, and she’s attending her first year of college, figuring it out for herself,” he replied. “And yes, not only have we had the conversation, we have yearly trips to the gynecologist to check her hymen.”

“This is what we do. Right after the birthday, we celebrate,” he explains. “Usually, like the day after the party, she’s enjoying her gifts. I put a sticky note on the door: ‘Gyno. Tomorrow. 9:30.'”

To get the results of the examination, his daughter must sign a release to give her father access to the results. “He’s like, ‘You know sir, I have to… in order for me to share information,'” the possessive father said. “I’m like, ‘Deyjah, they want you to sign this. They want you to sign this so we can share information. Is there anything you wouldn’t want me to know? Okay. See doc? No problem.'”

The gynecologist warned that the hymen can be broken by other activities other than sex such as horseriding, bike riding, and athletics. T.I. was not here for it.

The proud pappa announced exciting news during the interview: “I will say as of her 18th birthday, her hymen is still intact.”

T.I. says he goes to the gynecologist with his daughter Deyjah to make sure she’s maintaining her virginity.

When the podcast hosts proposed the idea that his daughter being a virgin will only make teenage boys lust after her more so, T.I. replied, “They’re no fun. Who wants a virgin? Like really? All that work.”

Twitter, of course, had hot takes on T.I.’s parenting style, and he started trending. Some commenters went as far as to classify T.I.’s father-daughter relationship as “abuse.”

T.I outta pocket & WAY too invasive. Daughters are policed way too often & the same energy is NEVER kept for sons.

I’m grossed out that “she’s 18” is trending because
A) TI is abusing his grown daughter and telling the whole world
B) 0-14, 15, 16, and 17 year old girls shouldn’t have their dads checking their vaginas? How about that?

Fathers who think they own their daughter's sexuality are DISGUSTING.

Fathers who police their daughter's sex lives at any age are DISGUSTING.

Going to the obgyn with your daughter to physically verify her "purity" (which isn't reliable) is DISGUSTING. pic.twitter.com/O2Yuo6zwQO

Y’all be teaching your sons how to use a condom at 11 but demanding your daughter remains a virgin until she’s 18???? The delusion. Seek help.

DISGUSTING: T.I. (@TIP) goes to his daughter Deyjah’s gynecologist yearly to make sure her hymen is still intact. He said the results are his. Gross!

2. His younger son admits he’s having sex & it wasn’t a problem.

That must fun for Deyjah to explain to her friends why she missed a day of school because her rapper dad took her to the gyno to make sure that she’s still a virgin.

In an episode of T.I.’s podcast of ExpediTIously, the rapper said he and his wife Tiny share half of everything, including her vagina.

“See, you can’t be rationing out stuff, talking about what you’re going to give nobody because what’s yours is mine and what’s mine is yours,” TI said on his podcast. “That means that little thing you got, that little sex box you got is half mine. So you pick which side you want, and that’s yours. The rest of it is mine. We can split it right down the middle of the…what do they call it? The, the, the, is it the, ‘uvula’?”