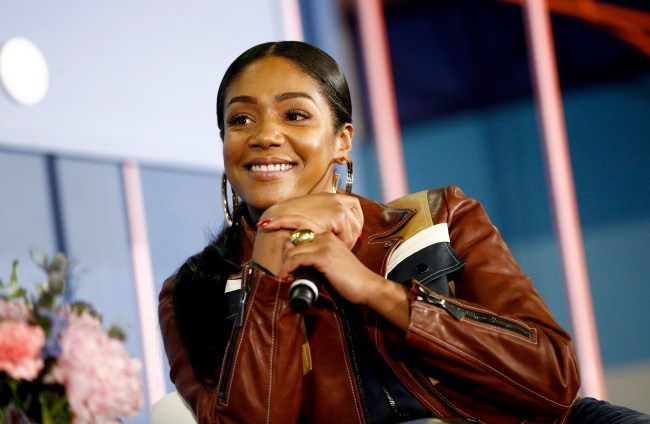 Comedienne Tiffany Haddish certainly seems to be Hollywood’s latest ‘it girl’. She’s everywhere you look. From The Last O.G. with Tracy Morgan to Uncle Drew which is about to come out to the Hilarity For Charity comedy special on Netflix to trending on Twitter. Truly, everywhere I look in the media someone seems to be talking about Tiffany Haddish and how her career is blowing up.

I’ll be honest, as much as Hollywood wants me to care about her I’m not really loving her comedy yet but that doesn’t mean my opinion won’t change after any one of the NINE TV and film projects she has in the works right now. She was recently the focus of a lengthy editorial interview with Lacey Rose for The Hollywood Reporter and I came across this excerpt on Twitter about how she tried to hook up with legendary playboy Leonardo DiCaprio:

With more than five hours ahead of us, I decide to make a game of it. I start easy by asking about Leonardo DiCaprio, since I had heard her joke before about wanting to have his baby.

“Yeah, I met him at a party two, three months ago, and I asked him if he’d let me hit that,” she begins. “He’s like, ‘Tiffany, you’re so funny.’ I’m like, ‘I’m serious.’ And then he goes, ‘I mean, I’d do it, but …’ I was like, ‘Come on, wasn’t you in a squad? The coochie squad or something?’ [Editor’s note: DiCaprio was famously a member of the “pussy posse” with pals Tobey Maguire and Kevin Connolly.] I told him, ‘My only stipulation: I wanna do it with you as your character in What’s Eating Gilbert Grape.’ He starts bustin’ up laughin’. ‘Why?’ he asks, and I say, ‘Cause I feel like that performance deserves a real reward and that reward is this (gestures at her own body).’ He starts goin’ into how he got into the role, how he worked with these kids and all this stuff, and I’m just listenin’ and listenin’, like, ‘Mmm-hmm, mmm-hmm.’ I finally go, ‘All that’s good, I just need to know, When’s this gonna happen?'” (via THR)

If you haven’t seen What’s Eating Gilbert Grape then this might not be a great story for you. To provide some context, here’s Leo’s character in that film:

Now, if you want to read that full interview on THR you can click here to read Tiffany’s story about meeting Roseanne Barr in her El Segundo neighborhood and how that went.