Guy Breaks In To Abandoned House To Smoke Weed, Finds A Live Tiger, Thought He Was Hallucinating 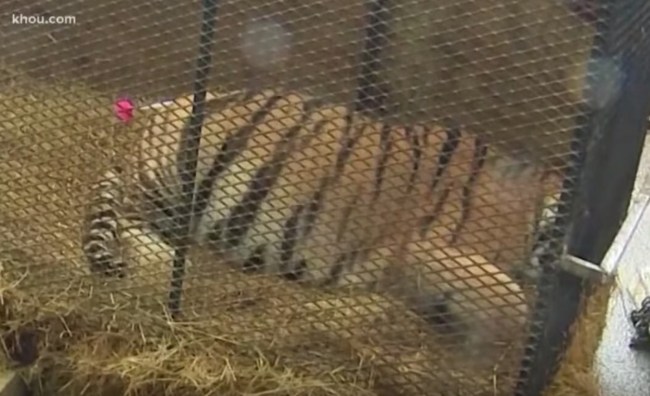 Have you ever hallucinated from smoking weeeeeeeed, man? No, you haven’t. That’s not a thing that happens from smoking cannabis by itself. Sure, you could’ve happened upon some weed laced with PCP and found yourself hallucinating but chances are you’re not Jenny from Forrest Gump and PCP hasn’t found its way to your doorstep.

Well, a Houston area man thought he was hallucinating from smoking weed and I get it, I do. If I’d snuck into an abandoned house to burn one down and saw a grown ass tiger in a cage I’d think I was tripping balls as well. You NEVER expect to see a tiger. 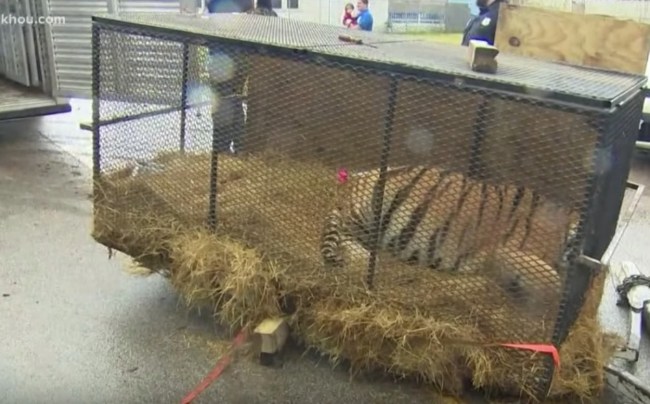 Click2Houston has the scoop:

The tipster said they were at the house to smoke marijuana and thought they were hallucinating when they first saw the tiger, according to police.
The tiger was found in a “rinky-dink” cage in the garage, which was not locked, police said. The garage was secured with a screwdriver and a nylon strap, according to police.

“A pretty small cage inside basically a garage in a house that didn’t look like it was in the best shape. So it was important that we get it out of that situation,” Lara Cottingham, with the city of Houston, said.

BARC officers found the tiger on Monday. They called Houston police, who were able to secure a warrant and remove the tiger.
The tiger was tranquilized in order to move it out of the house, officials said. (via)

So I actually live less than a mile away from a ‘rescue zoo’ that takes in exotic animals from wealthy people who buy them and realize they’re not capable of taking care of them. It’s not uncommon for me to be walking my dog and hear lions roaring. I can’t even imagine the shock this person must’ve felt when they went to smoke weed and found a damn tiger. I nearly soiled myself the first time I heard the lions roaring because it sounded like it was 15-feet away in the crisp morning air and I thought I was about to get eaten.

WATCH: A couple of people in Houston went into an abandoned home to smoke pot. Then they came face-to-face with a tiger. https://t.co/bsYEkAQkPN pic.twitter.com/4lBKBc85cM

This is WILD! 1000lb tiger found inside abandoned SE Houston home. Some pot smokers went in to home to light up and came face to face with him! Called 311. He’s healthy and onto greener pastures soon. The place is TBD. #khou11 #tiger #houston #htx pic.twitter.com/n4JC5MraYn

The million dollar question here is where the hell did the tiger come from? How does a gigantic tiger just happen to show up in an abandoned house? It wasn’t that long ago, a few years, that a tiger was found wandering around a Houston suburb. Houston seems to have a tiger problem, or at least one resident who keeps tigers as pets and doesn’t have a damn clue how to take care of them.