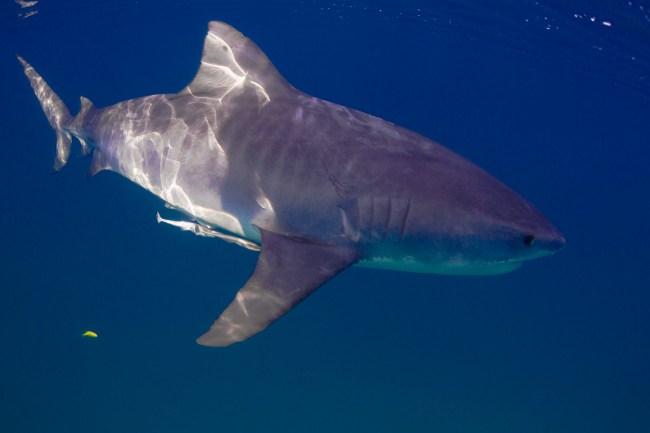 Sharks are always around. You don’t always realize this at the beach even when the water’s crystal clear but if you were to toss some fish blood in the water while fishing at that same beach you’d be shocked by how quickly the sharks would show up.

My first realization of just how many sharks are around at any given time came when I went parasailing in Captiva Island, Florida as a kid. We were on vacation and had spent the week at a beach house. I didn’t see a single shark until I went up in that parasailing rig and flew a hundred or so feet in the air above the water and I’m not even kidding when I say I probably saw at least a hundred sharks.

There was a massive school of blacktip reef sharks swimming. We went past a 6-8 foot Lemon Shark. A gigantic hammerhead. The sharks were everywhere.

Now, imagine if I was in the water and spearfishing. Shooting fish and sending blood into the water. That’d probably have those sharks pretty curious, wouldn’t it? That’s exactly the scenario that diver Jeremy Littler found himself in while spearfishing off Queensland, Australia. He was in 80+ feet of water when this overly curious tiger shark showed up and wouldn’t leave him alone:

Jeremy and his fellow diver John estimated this tiger shark was more than 11-feet-long which is absolutely ENORMOUS and you really don’t get a sense of that size from this clip. You just sense that Jeremy was probably shitting his pants as he kept his cocked and loaded speargun pointed at the curious tiger shark that wouldn’t leave him alone.

The two divers were eventually able to inch away from the shark and back to the boat before it came back for a second sniff. Tiger sharks are responsible for a high percentage of the shark attacks worldwide because they’re basically fearless when it comes to human beings. They’ll also eat just about anything. People have found everything from seagulls to license plates in the bellies of tiger sharks.