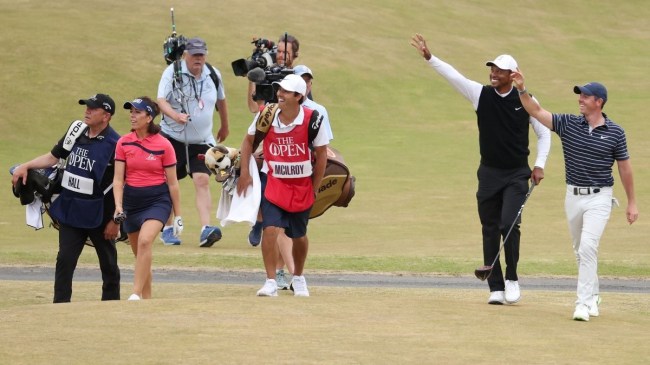 It has been 116 days since Tiger Woods last teed up a golf ball in a competitive event. The game’s biggest star is still dealing with the aftermaths of injuries suffered in a car crash nearly two years ago.

But now we know when he’ll be back, and he’s returning in a big way.

Can’t wait to play in Capital One’s: The Match with @McIlroyRory against @JustinThomas34 and @JordanSpieth to raise money for Hurricane Ian relief. See you boys under the lights on December 10th. pic.twitter.com/IdaVY6HGV8

Woods announced on Monday morning that he’ll team with Rory McIlroy to take on fellow superstars Jordan Spieth and Justin Thomas in the seventh edition of “The Match” on TNT.

The event, which began in 2018 with Tiger and Phil Mickelson, has had six prior additions. It has featured celebrities such as Peyton Manning, Tom Brady, Aaron Rodgers, Josh Allen, Patrick Mahomes, Steph Curry and Charles Barkley teaming with stars such as Mickelson and Bryson Dechambeau.

Tiger, Rory To Team Up For First-Ever Edition Of “The Match” Under The Lights

But the upcoming edition will be unique. That’s because players will play under the lights at Pelican Golf Club in Florida. It’s also the first time McIlroy, Spieth or Thomas will compete in the event.

Proceeds from the match, which tees off at 6 p.m. ET, will benefit Hurricane Ian relief efforts on the Gulf Coast. Previous editions of The Match raised $33 million for charitable organizations and provided 27 million meals through Feeding America, according to a news release. – via ESPN

Golf fans are absolutely fired up over Woods’ announcement.

Another interesting aspect of the announcement is the absence of any players from the LIV Golf Tour. The last individual match involved Bryson DeChambeau squaring off with Brooks Koepka. Both have since left for the Saudi-backed golf league.

While The Match is not officially a PGA Tour event, the PGA Tour has promoted it heavily on social media on Monday.

Though DeChambeau is probably happy to not be involved given his recent comments about finally getting to experience a true offseason.

Ya snooze, ya lose.