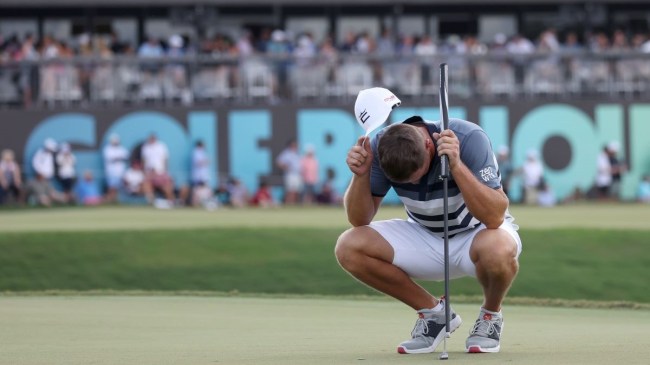 Bryson DeChambeau doesn’t seem to mind playing the villain. The 29-year-old beefy US Open winner has made a career of doing things his own way. And if fans don’t like it? Well, he’s just going to throw it in their face anyway.

DeChambeau’s level of villainy has only seemed to grow since he left the PGA Tour for the much richer pastures of the Saudi-backed LIV Golf series.

But it’s also made him a bit more of a punching bag for fans, and apparently for spectator ropes as well. Dechambeau finished the 2022 season on Sunday with a runner-up finish to Louis Oosthuizen in extra holes. It was the final LIV event of the year and was held at Trump Doral.

DeChambeau took to the ‘gram to congratulate Oosthuizen. But he also took a thinly veiled shot at the PGA Tour in the process.

“What a battle. 23 Holes of non-stop action w/ fellow competitor @louisoosthuizen57. Bittersweet feeling moving into my first ever off-season but couldn’t be more proud and honored to share a team with such amazing guys @paul_caseygolf@banstaa@charleshowell3@crushers_gc. Being on a team has really been a refreshing take on golf and made it much more enjoyable for me. See you all in 23’.” – via Bryson DeChambeau on Instagram

The “first ever off-season” comment is one that fans felt was a clear shot at the PGA Tour schedule. The problem, however, is that it’s not particularly true when you look at DeChambeau’s previous schedule.

It didn’t take long for fans to quickly line up to take shots at DeChambeau.

That's the problem with these clowns. They acted like they had to play in every event when that couldn't have been further from the truth. They all took their off seasons right after the Ryder/President Cups into January and sometimes even February. Grow up. https://t.co/sRxFIhAQns

Poor Bryson. What a joke. https://t.co/DpYa3kIov0

While fans got the last laugh on Twitter, DeChambeau will surely enjoy the more than $50 million purse that LIV put up for the season-ending event.