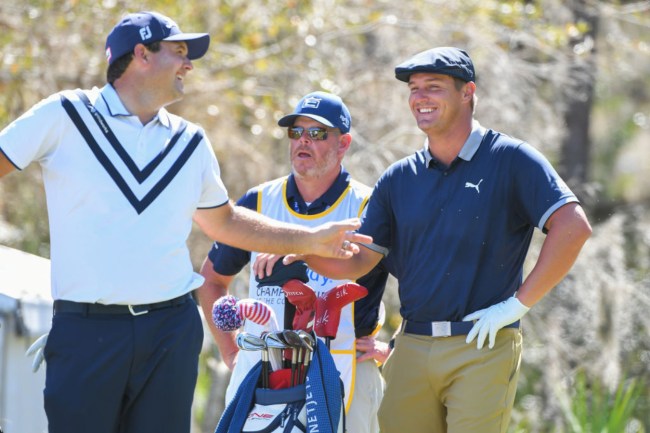 It certainly felt like a matter of when, not if, we’d be writing about Bryson DeChambeau and Patrick Reed joining the LIV Golf Invitational Series. That time appears to have come, as The Telegraph has reported DeChambeau and Reed are headed to the Saudi-backed circuit.

Like Phil Mickelson, Dustin Johnson, and many others who have already joined LIV Golf, Reed and DeChambeau reportedly agreed to “multi-million dollar deals” to join the breakaway league.

The Telegraph also reported that Rickie Fowler is on the cusp of joining LIV Golf as well.

DeChambeau and Reed reportedly coming to this decision comes just one day after the USGA announced LIV golfers will be allowed to tee it up in next week’s U.S. Open, a decision everyone in the golf world was waiting on.

Related: Why The USGA’s Controversial Decision Regarding LIV Golfers Playing In The U.S. Open May Open The Flood Gates

LIV Golf’s first event is set for June 9-11 in London. One would assume Reed and DeChambeau would make their debuts in the second event beginning on June 30 in Portland, Oregon.

Breaking Down DeChambeau And Reed’s Decision To Join LIV Golf

Reed joining LIV Golf isn’t exactly surprising as he is undoubtedly one of the most controversial golfers in the game today.

The 2018 Masters winner taking what is at least a double-digit million-dollar fee to join the controversial league to leave the PGA Tour, where he’s received plenty of criticism over the years, was probably a relatively easy decision for him to make.

DeChambeau making the move to LIV Golf is a bit of a surprise. While he seems like a guy willing to test the waters and compete in a rival league, he essentially pledged his allegiance to the PGA Tour just one week ago.

“Every person out here has their own opinion on it,” DeChambeau said at last week’s Memorial tournament when asked about LIV. “For me, I personally don’t think that at this point in time I’m in a place in my career where I can risk things like that.

“I’m loyal to my family that I’ve created around me with sponsors and everything. And as of right now, the golf world is probably going to change in some capacity.”

Fowler has been honest with his opinions about LIV Golf each time he’s been asked about it.

“I’ve been in talks with them for a long time,” Fowler told the press at The Memorial. “It’s something to definitely look at.”

“At this point, it wasn’t the right move or decision for us, but I’m not saying I’m for sure here or I’m going to go there. I’m going to just kind of leaving my options open and see how things play out.”

Fowler has struggled mightily over the last couple of years having dropped all the way to a world ranking of 145. He’s just two years removed from being a Top 25 player in the world. Fowler has managed just four Top 10 finishes in each of the last three PGA Tour seasons.