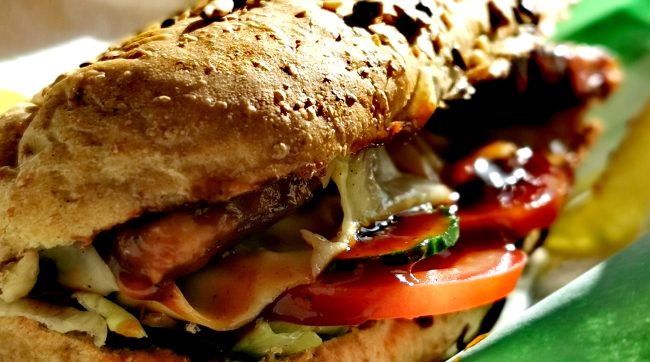 “What he doesn’t know won’t kill him,” says TikToker @hannahsmithhhh in a recent video which shows how she secretly steals a portion of her significant other’s Subway sandwich.

Her TikTok video, which has gone viral with over 1.4 million views, begins with footage of Hannah slicing into a Subway footlong sandwich, twice, right in the middle, pulling out that small section of the sub, then pushing the two ends back together.

Her trick is very similar to another TikTok video where a person did a similar thing to a pizza, giving themselves a giant slice right out of the center of the pie.

Related: TikToker Shows How Employees Can ‘Steal’ A Giant Slice Of Your Pizza Before Delivering It To You

The video then cuts to her man biting into his Subway footlong, blissfully unaware that he’s been robbed of some of his sandwich.

“How to eat his food without him knowing. Ladies, take notes,” Hannah writes in the caption.

Viewers of her video were split in their reactions.

“If I knew someone did this to my food I would get so mad,” wrote one viewer.

“OMG that’s what I would do to my kids subs and then I didn’t need to order myself one. It only worked a few times. They caught on,” commented another.

How to eat his food without him knowing. Ladies, take notes 😂 ##couples ##fyp @thedisgruntledssg

♬ how would they know bad girls club – Chris Gleason

Related: TikTokers Share Hack For Getting Unlimited Free Domino’s Pizza, But Some Accuse Them Of Stealing

“Lmao… something I would do… but my husband be knowing,” someone else wrote with a laugh.

“Haha. He was too hungry to notice,” Hannah responded.

“I did this to my wife and I felt so guilty,” another viewer admitted.

“I told him after the first bite, lol, he just laughed,” Hannah replied.

He obviously has a very good sense of humor as evidenced by some of Hannah’s other TikTok videos.

##duet with @lovesoreal got him 😂

♬ Duet to get your mans reaction – Love So Real ❤️