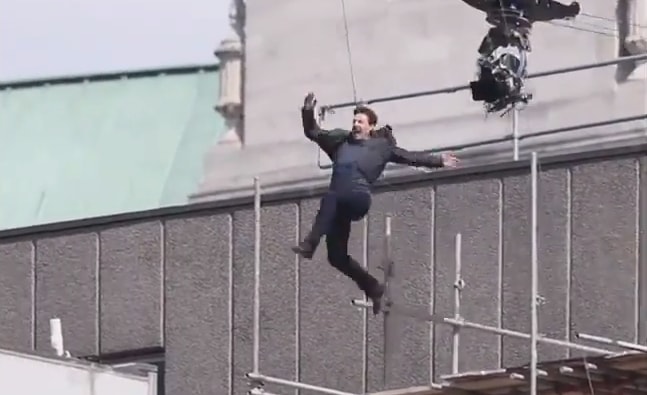 Over the summer, video emerged from the set of Mission Impossible 6 showing Tom Cruise suffering a nasty injury while attempting a stunt. Cruise did not return to filming stunts for the upcoming action movie until this month. It turns out that Cruise broke his ankle while attempting to jump from one building roof to another. Initially, it appeared that Cruise maybe cracked a rib or two, but new videos show that the Hollywood actor suffered a horrific ankle injury.

On Friday night, Cruise appeared on The Graham Norton Show to promote Mission: Impossible: Fallout, despite the movie not hitting theaters until July 27, 2018. Cruise, along with his MI:6 co-stars Henry Cavill, Rebecca Ferguson, and Simon Pegg, didn’t have a finished clip of the film to present, so Cruise showed videos of his brutal ankle injury. Videos from different angles and in slow-motion display just how vicious of an ankle break he suffered. “If you are squeamish, don’t watch this,” Graham Norton warned. “A bone doesn’t pop out or anything but it is an odd angle for anyone’s foot to be at.” Pegg commented on Tom’s nasty ankle injury, “No one’s foot should ever do that, ever.”

“I was chasing Henry and was meant to hit the side of the wall and pull myself over but the mistake was my foot hitting the wall,” Cruise said. Even though he broke his ankle Cruise still attempted to finish the scene and run before falling to the ground in pain. “I didn’t want to do [the stunt] again,” Crusie said. “I knew it was broken and I just said ‘Ugh,’ and I ran past the camera. We got the shot, it’s in the movie. That profile shot, both those shots, are in the movie. I said, ‘It’s broken. That’s a wrap. Take me to hospital’ and then everyone got on the phone and made their vacation arrangement.” Cruise spent 8-10 hours a day, seven days a week in rehab “because we still have some major stunts to do,” he explained.

Despite the ankle not totally healing, Cruise is still out there doing stunts in London. The film is still six weeks away from wrapping up. Here is the Graham Norton audience attempting to do stunts and let’s just say that they’re not exactly Tom Cruise-esque, but none of them broke their ankle so maybe they’re doing something right.