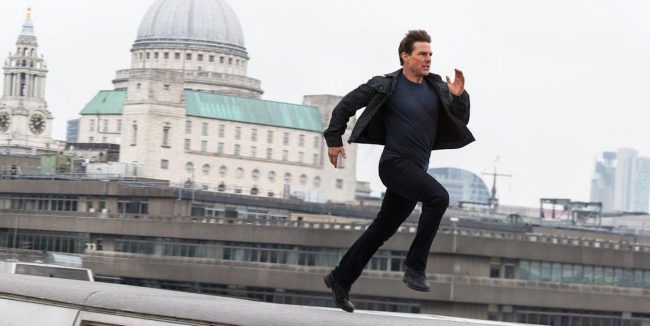 When it comes to franchise moviemaking, rarely does the product continue to improve as time goes on. Sure, the Marvel Cinematic Universe has figured out a sustainable formula, but in general, most franchises experience a dip in quality the longer they carry on. Just look at The Godfather Pt. III or Spider-Man 3 or The Dark Knight Rises (and these are just examples I can think of off the top of my head).

Tom Cruise’s Mission: Impossible, though, is not one of these franchises, as the films seem to get bigger and better with every passing entry. And that’s a credit to Cruise’s crazy ass, as his commitment to making them excellent is no small part of that increasing quality and success.

Cruise obviously enjoys making the franchise, as he’s famously always done his own insane stunt work despite the ever-increasing degree of difficulty. In fact, Cruise enjoys making these movies so much that he’s been told to stop looking so happy whilst filming these various death-defying scenes.

“I am a very physical actor and I love doing them. I study and train and take a lot of time figuring it all out. I have broken a lot of bones!” Cruise said during a recent interview on The Graham Norton Show.

“The first time of any stunt is nerve-wracking, but it’s also exhilarating. I have been told a few times during shooting a stunt to stop smiling.”