On Today’s Episode Of ‘Tom Cruise Doing Crazy Stuff’: Filming On Top Of A Moving Train! 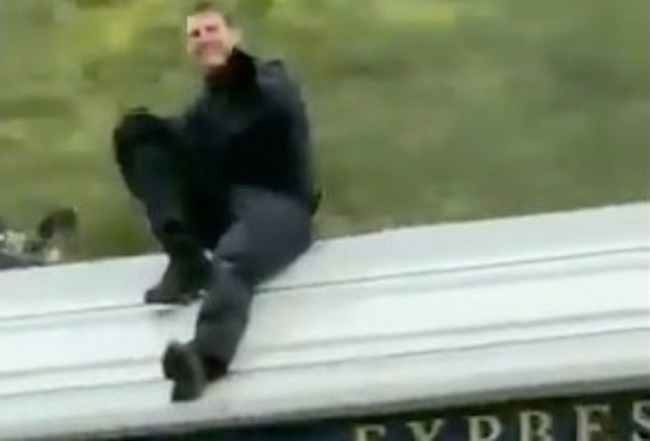 If you told me that Tom Cruise was the only person on Earth who was 100% immune to coronavirus, I’d totally believe you without any semblance of hesitation. “Oh, Tommy C has unique alien blood that doesn’t make him susceptible to the same disease that’s currently crippling mankind? Well, of course! Say no more fam.”

Shit, you could tell me that the movie The Curious Case of Benjamin Button is actually a biopic about Tom Cruise and I’d be on board. R.I.P to your Grandma but Tom Cruise is built different. How else do you explain the fact that he’s going to be the first actor to film a movie in space when Elon Musk straps him to the tip of a rocket next Fall? You know how E.T. phoned home? Wouldn’t shock me if Tom Cruise was planning on using this SpaceX flight as a mere commuter train back to his planet in the cosmos.

How else do you explain the fact that Cruise is nearly 60-years-old and is still throwing himself out of helicopters?

Or, as the newest video from the production of Mission: Impossible 7 shows, strapping himself to the top of high-speed trains? I’ll tell you how you explain it: the man is not of this Earth.

Tom Cruise and director Christopher McQuarrie filming on top of a moving train for 'Mission: Impossible 7'

At this time, the still-untitled seventh (!) film in the Mission: Impossible franchise is set to hit theaters in the United States on November 19, 2021. As for Mission: Impossible 8, that’s set to release sometime in 2022. Regardless of when they do eventually come out, we’ll be in-line to see it, as it can be argued that Mission: Impossible is currently Hollywood’s greatest action franchise.