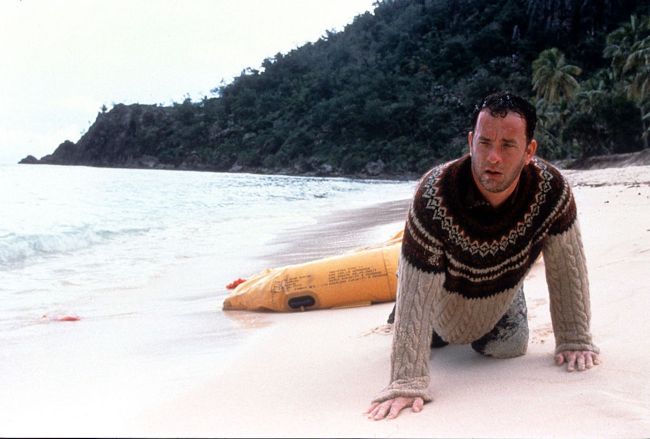 For both Gen Xers and Millennials alike, Tom Hanks is one of the greatest movie stars of our lifetime. Hanks, Denzel Washington, Leonardo DiCaprio, and Brad Pitt are the faces on my personal Mount Rushmore of movie stars. But while the likes of Denzel, Leo, and Brad achieved dramatic leading man success from the start, Hanks took a bit of a different route: the rom-com route.

Prior to starring in his string of hits that turned him one of the defining actors of his generation, Hanks was known for his roles in rom-coms and comedies such as Splash, Volunteers, The Money Pit, Punchline, and The Burbs. But then, in the 90s, Hanks made a pivot to drama and never looked back, winning two Academy Awards and being nominated for another four.

That change of strategy, according to Hanks, was entirely intentional, as he recently revealed to Bill Simmons that it was around that time he declared to his agent that he no longer wanted to play “pussies.”

“Did you know your career was going to pivot the way it did in the 90s?” Simmons asked Hanks on his podcast.

“Hell no,” Hanks said. “At the end of the day, I had to look at what my part in all of those movies [in the late 80s] was, what I brought to them other than showing up on time and knowing my lines. What additive quality did I bring to them? And I came away from that understanding that I was now 35, I was in my mid-30s. I had three kids, had been through enough, getting my ass kicked when I thought everything was going to be groovy.”

“I sat down with my crack team of showbusiness experts — and my kids hate it when I use this word, because I don’t mean it in a pejorative fashion, I mean it in a way of level of maturity, and a level of life experience and expectation — I told my agent ‘I don’t want to play pussies anymore.’ And by that, I mean guys who whine, guys who says ‘Boo hoo hoo, I need something more in my life. Who am I gonna be? What am I gonna do with my life?’ It’s now time to play adults who go through bitter conflict, and the first movie that came out of that was A League of Their Own. [via The Bill Simmons Podcast]

If you look at Hanks’ filmography, you can see exactly what he’s talking about, too. In the late 80s, he’s starring in comedies like Big and Turner & Hooch and Joe Versus the Volcano, but then, beginning with A League of Their Own in 1992, he kicks off a run of iconic 90s films that includes the likes of Philadelphia, Forrest Gump, Apollo 13, Saving Private Ryan, and so on. The rest, as they say, is history.