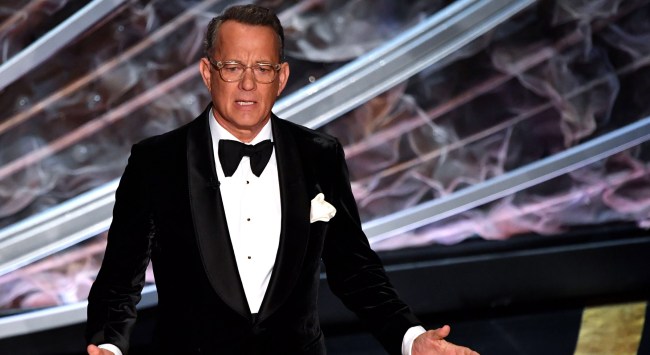 Tom Hanks has undergone some wild transformations over the years for his films.

From his roles in Castaway and Sully to Cloud Atlas and A Beautiful Day in the Neighborhood, America’s dad has been quite the chameleon on screen over the years.

None of those roles, however, will prepare you for how he looks with a bald head as he begins playing Colonel Tom Parker for an upcoming Elvis Presley movie.

The biopic, simply titled Elvis and directed by Baz Luhrmann, requires Hanks to not only play the role of Colonel Tom Parker, he has to actually look like him too – meaning he’s pretty much bald – something he revealed during a recent appearance on The Graham Norton Show.

“And here, let me show you the horrible haircut I have to have in order to portray Colonel Tom Parker,” as he removed his cap.

“Okay, can you see that? Look at that thing! … I just scared the children … What I really want to do is just have a little tuft of hair right here and then a big beard and then everybody will think I’m Graham Norton.”

Yeah, I think I am going to need to put that on a loop, just so I can freak out everyone I know when I send the GIF to them.