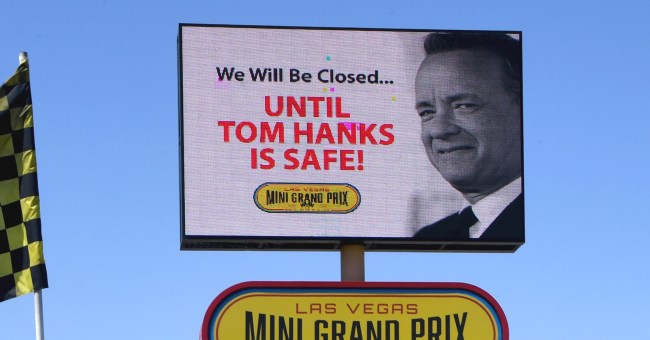 In a day that has been filled with news we never thought we would see or have seen before, here’s another one, America’s dad Tom Hanks went viral over the weekend thanks to a tweet published by Jenna Jameson.

For some odd reason, Jameson, out of the blue, wrote on Twitter, “Tom Hanks just deleted 3 years worth of tweets in the last hour.”

Tom Hanks just deleted 3 years worth of tweets in the last hour. 😏

Less than two days later and Jameson’s tweet about Hanks has been retweeted over 21,000 times and received almost 63,000 likes.

Which is all a little strange considering the the statement Jameson made in the tweet is 100 percent not true.

To all the Grads of 2020, you Chosen Ones! Print this up on a sheepskin! Hanx pic.twitter.com/4llw7fPtxB

So, uh, what is with all the retweets and likes?

According to Mikael Thalen of Daily Dot…

Hanks has become a primary target of conspiracy theorists aligned with the QAnon movement, which believes that secret government insiders are working alongside President Donald Trump to bring down a child-eating pedophile ring run by Democrat politicians and Hollywood liberals.

Okay, so that might explain some of it, but why did Jameson even send out that tweet in the first place?

Turns out she wasn’t the only one who believed it to be true.

The Independent thinks Jameson’s tweet went viral because of Trump supporters “watching social media for any movement they can use as ‘evidence.'”

How deleting three years worth of tweets, even if it were true, qualifies as evidence of anything is a mystery I cannot unravel.

Now then, why did people think Tom Hanks deleted three years worth of tweets in the first place?

No one really knows, but it appears to have just been some sort of Twitter glitch.

Basically, all this little event proved is that people really have very vivid imaginations and far too much time on their hands these days.

He thought since Mueller's team wiped the iPhone, he could just wipe his Twitter with the same results. Wrong!

I was disappointed when I found out what Tom Hanks has been doing behind the cameras. Some of the proof of his horrific living is in his tweets...other proof are the victims that have come out...and of course his ties to Epstein.

Most of Oprah's tweets won't allow comments. Kevin Spacey last tweet is in 2019 and Ellen's last tweet was the end of July of this year.

They're still there. Click on tweets and replies pic.twitter.com/IJyKQ3dSe0

I can respect that 👏🏻