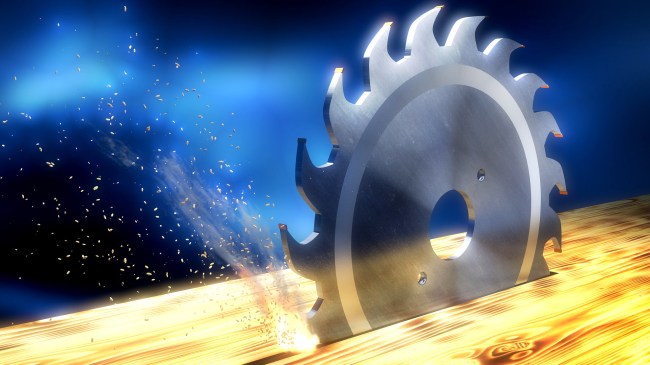 Here’s a new one. On Friday, a judge in the district court in Ljubljana, Slovenia sentenced 22-year-old Julija Adlesic to two years in prison for insurance fraud after she deliberately cut off her own hand with a circular saw to collect payouts from five different insurance companies.

As one can imagine, this story has become pretty big news in Slovenia as the media over there has even given the case its own title, calling it the “Cut-Off Case.”

According to Sky News, if Adlesic had gotten away with it (though how cutting off your own hand qualifies as getting away with anything is debatable) she would have raked in around $1,184,046.25 (£925,000).

Her boyfriend, Sebastien Abramov, who was also in on the plan, was sentenced to three years in prison, and his father (!) Gorazd Colaric received a one-year suspended sentence, and Abramov’s mother was also accused of being involved but was found not guilty.

Quite the family affair.

A woman who cut off her own hand with a circular saw in the hope of getting a €1m (£925,000) insurance payout has been sentenced to two years in prison https://t.co/nyBOx8nKzY

After sawing off her hand, the couple went to the hospital and claimed she had injured herself while cutting some branches.

Unfortunately for them, prosecutors were able to show that the boyfriend had done some searching on the internet for information about how artificial hands work in the days leading up to the incident.

ABC News reports that authorities also stated that Adlesic and her boyfriend deliberately left the severed hand behind rather than taking it to the hospital with them to make sure surgeons couldn’t reattach it in an effort to make sure her disability would be permanent.

Just one problem. Or, well, one of the problems, was the fact that despite leaving the hand behind, police officers who were investigating the scene were reportedly able to recover the hand in time for it to still be reattached.

Of course, she denied cutting off her hand on purpose, stating, “No one wants to be crippled. My youth has been destroyed. I lost my hand at the age of 20. Only I know how it happened.”

According to Total Slovenia News, Adlesic’s boyfriend Abramov, who helped her cut off her own hand with a circular saw, is also being tried for murdering his then girlfriend in 2015.

Abramov claims that she died as the result of a shooting accident. Hmmm… this guy must be a jinx or something.

Now here comes the real kicker showing what dumb criminals these people are.

Abramov made life and accident insurance policies for Adlesic with five insurance companies at the end of 2018. In January 2019, when the insurance was valid and the first instalments paid, Adlesic cut off her left hand just above the wrist with a circular saw at Colaric’s home.

Only days later, the four suspects filed damages claims with the five insurance companies. But they did not receive any money, as police already started investigating the case.

Abramov’s lawyer plans to appeal, while Adlesic’s lawyer, Boris Grobelnik, also disagreed with the court’s ruling, stating that the sentence should have been lower as there is no danger of her possibly repeating the offense.