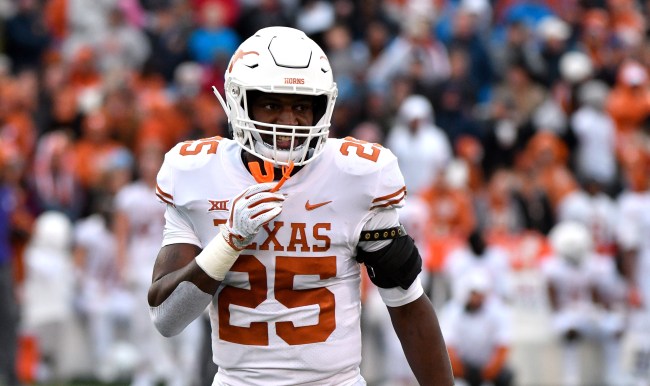 Here’s another new one for you. During Saturday’s 59-3 rout of UTEP, Texas Longhorns’ junior safety B.J. Foster abruptly decided to quit the team in the middle of the game.

Texas insider Anwar Richardson reported that during the third quarter of the contest Foster decided he was done playing as he was apparently upset about his lack of playing time against UTEP.

Texas junior safety B.J. Foster quit the team during the third quarter of Saturday's victory against UTEP, according to multiple sources. It remains unclear if Foster will have an opportunity to play for Texas again even if he has second thoughts.

The former consensus five-star prospect started eight games for Texas in 2019 and 14 of 22 overall during his two season with Texas, but was reportedly listed as the backup strong safety on the Longhorns’ depth chart handed out before the game.

This summer, Foster also made news in Austin when he fractured his fifth metacarpal bone in his hand after “a fight with a car bumper” when someone damaged his car and did not leave a note, according to the American-Statesman, much to the chagrin of Texas coach Tom Herman.

In hindsight, BJ Foster's frustrations have been brewing for months https://t.co/hQ1hQ6FFOa

Sunday evening, Richardson reported that Foster met with members of the Longhorns coaching staff and had decided that in hindsight he would like to remain with the team.

According to my sources, Texas safety B.J. Foster met with members of the Longhorn coaching staff on Sunday and will remain with the team.

Momma must have talked some sense into him

Texas coach Tom Herman is scheduled to speak to the media at noon Monday.

Foster, the number 24 overall recruit in the class of 2018, has recorded 81 total tackles, four sacks, two forced fumbles, and two interceptions during his freshman and sophomore seasons for Texas.