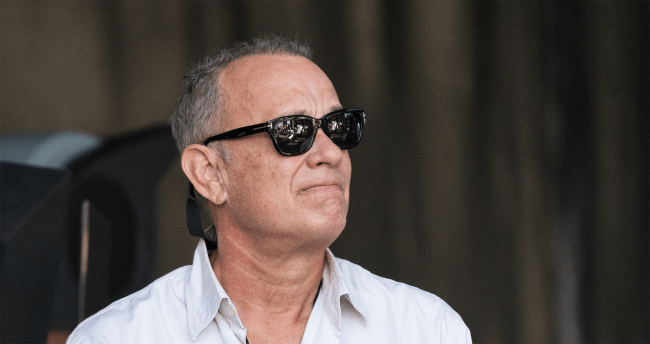 Tom Hanks once again gave a couple a surprise they will never forget on their wedding day.

Saturday in Pittsburgh, as Grace Gwaltney was about to get into a limo after taking pictures with her wedding party, the legendary actor appeared, seemingly out of nowhere, and said, “Hey! My name is Tom Hanks. Can I take a photo with the bride?”

“I immediately froze and was just looking around,” Gwaltney told KCRA News. “I didn’t know what to do.”

She added, “You see him and then he starts speaking and he was like, ‘You look so beautiful. I’m so happy for you.’ He was talking in my ear … I was thinking of Toy Story.”

“We all lost it,” said wedding photographer Rachel Rowland. “The bridesmaids shuffled out of the limo, and he posed with photos and congratulated everyone, and then as fast as he popped in, he was gone. It was just so sweet and fun!”

Rowland told the Pittsburgh Post-Gazette, “He was just as wonderful and charming as you’d assume. His wife, Rita [Wilson], was there and got in some photos, too.”

Turns out, Grace Gwaltney wasn’t the only person in Pittsburgh to get a surprise visit from Tom Hanks last week.

Here he is at the Busy Beaver, a home improvement store.

And here’s Tom Hanks surprising Ashley Glass, a stay at home mom, and her son as he was filming outside their home.

“I was like, ‘Oh, my God, he’s walking over here!’” Glass told the Post-Gazette. “I hurried up and got my phone. He came over and was talking to us. I was starstruck. I didn’t even know what to say.”

This is also far from the first time Tom Hanks has done something like this.

Back in October of 2021, Hanks blew another couple’s minds when he crashes their wedding on the beach.

In 2016, Hanks showed up out of the blue as a newlywed couple were taking their wedding pictures in Central Park.

Hanks is in Pittsburgh filming a movie called A Man Called Otto about a “a crotchety, irritable, and fiercely strict widower, lives a lonely life, judging everyone he sees. When he forms an unlikely friendship with his new neighbors, Otto begins to change.”