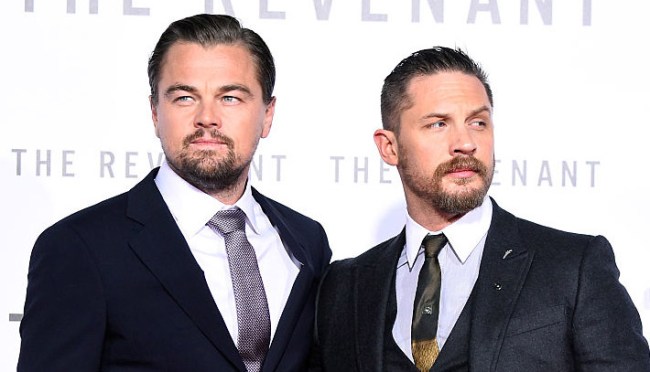 First off, I can’t imagine being an average Joe working on the film The Revenant. If I did work on that set I would forever feel incredibly inferior after being the presence of bro kings Leonardo DiCaprio and Tom Hardy. Throw in the fact that DiCaprio won an Academy Award for his acting in the film and Hardy was nominated and there’s no way NOT to feel inferior to these two guys.

DiCaprio, of course, had no qualms with being in the presence of friend to both man and mutt, Tom Hardy. In fact, he was so sure that Hardy would receive an Oscar nomination for the film he made a wild bet with him.

At some point in the not too distant future, Tom Hardy needs to book himself in for a new tattoo. The 39-year-old British actor has already got quite a few, as the markings protruding from his T-shirt — and the many topless shots that exist of him on the internet — attest. He’s had the London skyline, a Chinese dragon, his wife’s name (and his ex-wife’s initials), a Madonna and child and a Buddha with an AK47. This latest one though, he’s dragging his heels about. “I haven’t got it yet,” he says cheerily, taking a deep lungful from his electronic cigarette, “because it sucks.”

Hardy had a wager with Leonardo DiCaprio, with whom he starred in last year’s The Revenant, a story of betrayal and vengeance among 19th-century fur trappers. DiCaprio predicted that Hardy would get an Oscar nomination for his supporting role as a feral frontiersman who leaves DiCaprio’s character for dead after the latter is mauled by a grizzly bear. Hardy bet a tattoo of the winner’s choosing that he wouldn’t. Hardy lost. Hardy recreates DiCaprio’s design on a Post-it note for me. “He wrote, in this really shitty handwriting: ‘Leo knows everything.’ Ha! I was like, ‘OK, I’ll get it done, but you have to write it properly.’”

Welp, after putting it off for a long time, it now appears that Hardy has fulfilled his obligation and gotten himself inked with “Leo knows all” on his arm.

How this was figured out is a whole other interesting story.

Fan Andrew Calisterio was able to grab a selfie with the man who will be playing Venom. However, it wasn’t him who noticed the tattoo. It was the eagle-eyed fans on Instagram.

“F**k! Did you notice the ‘Leo knows…’ tattoo on his bicep? Wasn’t that the bet?” wrote one commenter.

Sure enough, there it is on his right bicep.

Considering the fact that Hardy didn’t have the tattoo when he spoke to fans at Comic Con Experience 2017 in Sao Paulo, Brazil earlier in January the tattoo must be relatively new.

Not that most people, other than his diehard fans, will notice.