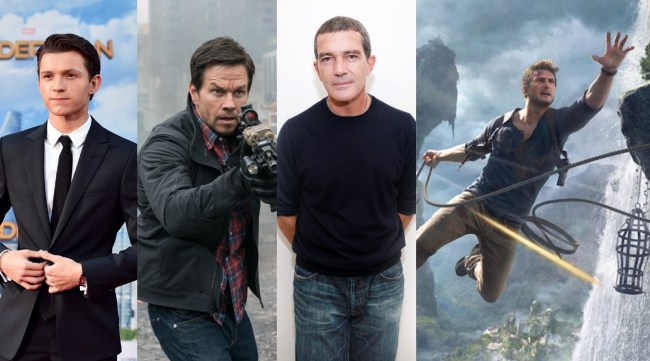 To clarify, Tom Holland and Mark Wahlberg have been attached to Uncharted for a while, while recent Academy Award-nominee Antonio Banderas just joined the cast today.

While the film has spent a considerable amount of time in development hell, it’s recently picked up some serious momentum after Venom and Zombieland Ruben Fleischer signed on to direct at the beginning fo the year. Prior to Fleischer getting the gig, six other directors had been attached at one point or another.

Now, with the stars locked in and the director in place, the rest of the cast is beginning to be filled out, as Variety reports that Banderas, Sophia Ali and Chilling Adventures of Sabrina actor Tati Gabrielle have joined the film.

Holland will be playing series lead Nathan Drake while Wahlberg will be portraying Victor Sullivan, Drake’s father figure. While it is currently unclear who Banderas, Ali, and Gabrielle will be playing, I’m willing to guess he’s playing some sort of villain.

Art Marcum and Matt Holloway wrote the most recent draft of the script. “Uncharted” is set to release in theaters March 5, 2021.

Charles Roven and Alex Gartner are producing for Atlas Entertainment and Avi Arad and Ari Arad for Arad Productions, while Playstation Productions’ Asad Qizilbash and Carter Swan will serve as executive producers. [via Variety]

Uncharted, which will be based on the popular and long-running Playstation franchise, follows Drake, who is a charismatic yet rebellious treasure hunter who journeys across the world to uncover various historical mysteries.”

At this time, Uncharted is set to hit theaters in the United States on Friday, March 5, 2021.