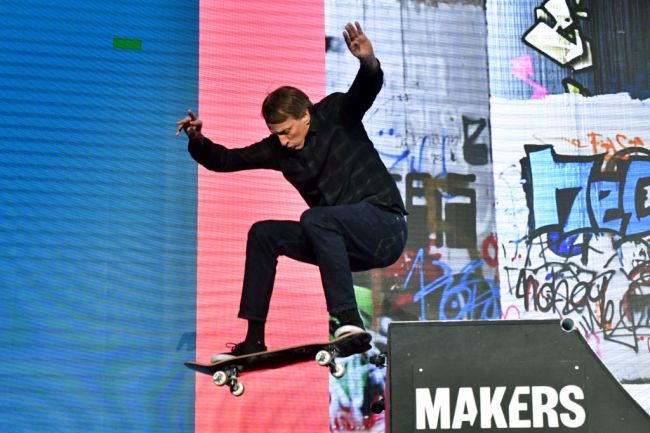 If you’re reading this and wanted a skateboard with Tony Hawk’s blood inside, I’m sorry, but it is too late. The blood-infused skateboards sold out in less than an hour.

Hawk teamed up with canned water company Liquid Death to create skateboards that have the legendary skateboarder’s blood in them. There were only 100 limited-edition boards available infused with “100% real Tony Hawk” blood, and they sold out in less than an hour, CBS Sports reported.

The bloody skateboards, which allegedly have a vial of the Birdman’s blood mixed with the paint for the decks, sold out in less than an hour despite being priced at $500.

Tony Hawk said in a press release, “This collaboration is taking those connections to a new level, as I have literally put my blood (and soul?) into these decks.”

A portion of the profits from the bloody skateboards will go towards cleaning up plastic pollution and building skateparks in low-income communities.

“I take pride in knowing that organizations fighting plastic pollution and creating skate parks worldwide will be supported through our efforts,” Hawk added. “The two charities that proceeds will go towards are the Skatepark Project, as well as 5 Gyres, an environmental nonprofit organization.”

The 53-year-old former professional skateboarder said, “I am deeply thankful to have a connection with my fans, and I appreciate how Liquid Death connects with theirs.”

“Tony’s bled plenty on skate ramps before, so a little more blood for this wasn’t a big deal,” said senior account manager Jake Tredo, who added the skateboards sold out within 20 minutes of being available.