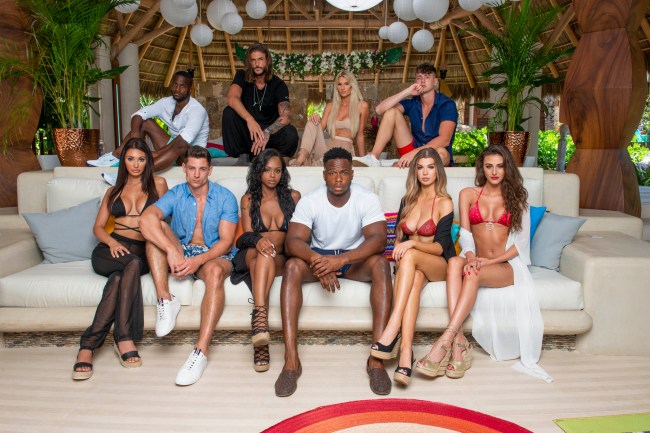 My colleague Cass said it the best on Twitter the other night: Netflix’s Too Hot To Handle is officially the buzzy TV show of the weekend.

The steamy reality TV show is all everyone and their brother is to be talking about come Monday.

And the Too Hot To Handle memes are going to be great.

The show is trashy. Dumb-as-rocks trashy. The characters are vain, superficial train-wrecks, talking about their Instagram follower counts and how much they love hooking up. It’s impossible to not hate, them but also kinda love them.

Character development on Too Hot Too Handle – if you want to call it that – is a long-play. In the meantime, there’s so much T&A and patronizingly dumb group B-roll – classic moves from the reality show production playbook, it’s impossible to stop watching once you take the plunge.

And it completely rules. A++ binge-watching television, in the times of quarantine.

Before we dive into Netflix’s Too Hot To Handle memes, here’s the show’s premise. Some spoilers ahead – since you’re going to hear a lot about this Orwellian thirst trap in the coming days.

You get it now.

But there’s one caveat: No kissing. No heavy petting. No sexual contact. And, obviously, no sex.

There’s a $100,000 prize pool for the group as long as they can avoid physical intimacy with each other.

And an Alexa-like robot device called Alana is keeping tabs any time sparks start to fly or a couple shacks up together.

Personally – I love it. I was a huge fan of all the late Aughts reality shows that exploded from 2006 – 2011. In college, trashy VH1 / MTV reality shows like Flavor Of Love, I Love New York, Rock Of Love etc et all were literally appointment television in my house. Great shows to rip a bowl and drink bottom shelf vodka to. After college, this led way to Jersery Shore, whose first two seasons I consider to be the proverbial high water mark for dating reality TV shows. It’s basically been a downhill slide from there.

It took about eight years, but hook-up shows are back, baby! As much as I love a buzzy documentary like Tiger King, I’m pretty excited about the resurgence of cringe-y, low-brow TV that’s pure diesel. Netflix has done a great job owned this void on the platforms with The Circle and Love Is Blind. Too Hot To Handle, however, shamelessly takes the cake.

While every blogger and Redditor and bored-at-home types out their take about what it all means for dating or Tinder culture or Instagram, I’m here for the dank memes.

In just 48 hours, the Netflix Too Hot To Handle memes are already on fire.

Proceed with caution, spoilers ahead: Some of these Too Hot To Handle memes are more relatable if you’ve watched the show.

You’re going to be rooting for The Purge afterwards, but once you start, you won’t be able to stop.

Too Hot on Netflix is all people are going to be talking about by Monday night. pic.twitter.com/To23Dkgb18

This too hot to handle show is so stupid. How can they not last 4 weeks without sex for 100k when I’ve gone 6 months before for free

Me: Too Hot To Handle on Netflix is a mess, a trainwreck, a stupid show.

Also Me: proceed to watch the whole season in 1 day #TooHotTooHandle pic.twitter.com/Yjmu2Q4rU5

Too Hot To Handle is by far the dumbest reality tv show I’ve ever watched but I can’t stop watching pic.twitter.com/71Yd7vRQnu

Too Hot to Handle is a fascinating look into the male mind pic.twitter.com/7IP2ThDKnM

Highly recommend “Too Hot To Handle” on Netflix pic.twitter.com/t9jNqiHpZZ

Haley when she’s around Francesca vs when she has to interact w the guys in the house #TooHotToHandle pic.twitter.com/rkABLZPcQ4

Onto the third episode of this new netflix show too hot to handle and in walks Rob Schneider pic.twitter.com/GrtzPStENE

telling my kids this was kim kardashian and paris hilton #TooHotToHandle pic.twitter.com/dZ6BJfuUJl

Kelz when Harry and Francesca are alone in #TooHotToHandle pic.twitter.com/wvB4qs1uyo

everyone in the ‘too hot to handle’ cast: forming connections, temptation, falling in love

How the narrator in Too Hot To Handle thinks we’re gonna react to her jokes pic.twitter.com/H7T3OfTf9J

I scoffed through everything but i really sat here and watched every single episode of too hot to handle pic.twitter.com/ABtVoBcwTk

Me after watching 'Too Hot to Handle' in one sitting:#toohottohandle#Toohottohandlenetflix pic.twitter.com/0auqfev8S8

couples going to the private suite on Too Hot To Handle pic.twitter.com/ats4hWXPVk

Finished Too Hot to Handle on Netflix. (Binge watched like it was no tomorrow, which 🤷🏾‍♀️.)

Damn near everybody on that show… pic.twitter.com/O4jXXQxwoo