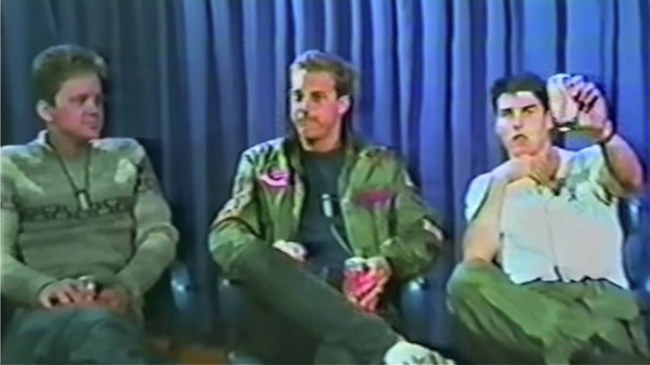 Here is long-lost footage of a forgotten interview that was done on the USS Enterprise, which was the world’s first nuclear-powered aircraft carrier as well as where part of Top Gun was filmed in 1986. The crew of the USS Enterprise interviews the cast of Top Gun including Tom Cruise, Anthony Edwards, and Tim Robbins and it is glorious.

A sequel to Top Gun is coming in 2019, but that doesn’t mean that we can’t enjoy some three-decades-old interview from the original cast of Top Gun. The long-lost footage of actual military servicemen interviewing the stars of Top Gun features some pretty sweet 8-bit graphics and some 80’s-style music that belongs in an old school video game.

Before they were ultra famous (*spoiler alert* and dead) get the insight from Maverick and Goose from the original Top Gun. When asked about being on a naval warcraft carrier that is out at sea, Anthony Edwards joked “I had an erection.” There you go. The footage is pretty spectacular.

This week a meme has gone viral with Cruise and Kelly McGillis, who is five years older than him.

Tom Cruise with his Top Gun co star Kelly McGillis. She is only 5 years older than him but it's very clear that she did not age as gracefully as he did ! Below is a small thread about aging ! #plasticsurgery pic.twitter.com/ZFmsDBEcn0

We have learned that Val Kilmer will be back as Iceman in the Top Gun sequel. Top Gun: Maverick flies into theaters on July 12, 2019.