IT’S OFFICIAL: Val Kilmer Is BACK As Iceman In ‘Top Gun 2!’ 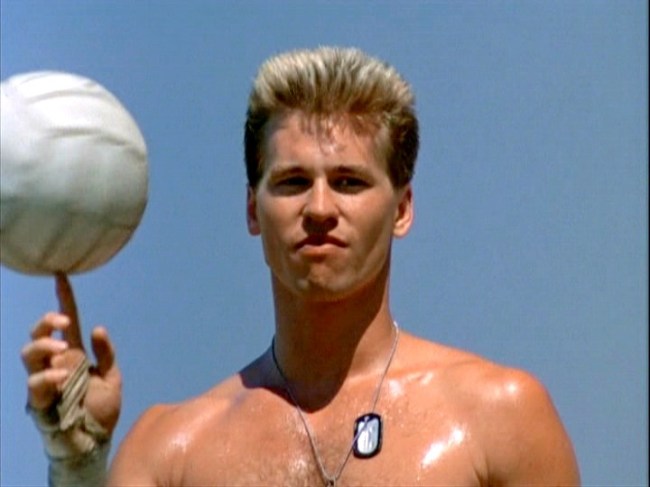 We are exactly 400 days away from Top Gun: Maverick screaming into movie theaters and the Iceman cometh. That’s right, everyone’s favorite blonde spiky-haired hotshot jet fighter pilot/shirtless volleyball player will be back in the saddle! Val Kilmer will be in Top Gun 2! Iceman can be our wingman anytime.

Last May, the 58-year-old Kilmer wore an Iceman t-shirt and shared an Instagram post that said: “friends said it’s official – #TOPGUN2 was announced today. I’m ready Tom- still got my top gun plaque! Still got the moves! Still got it!”

Previously, LT Tom “Iceman” Kazansky was not listed to be in the sequel, but that changed on Wednesday when Kilmer was added to the cast. Last December, Kilmer revealed that he had been battling cancer for two years.

Hopefully, Iceman is still his gum-smacking old self and trolls Maverick by telling him that the plaque for the alternates is down in the ladies room. Now we just need to wheel in 84-year-old Tom Skerritt to come back as Viper.

The plot revolves around Radar Intercept Officer LTJG Nick “Goose” Bradshaw’s son (RIP Goose, gone but definitely not forgotten). Goose’s son will be a young man with all-American good looks who rode a football scholarship to an Ivy League degree. “He is in love with Sugar. He distrusts Maverick and dislikes what he stands for, although they have a lot of similarities,” the character description says. “Eventually, comes to respect Maverick and uses his techniques. He is forced to eject in enemy territory and Maverick comes to save him.”

I feel the need… the need for speed. Dammit! I miss Goose, I hope his son grew up to be half the man that he was.

The sequel will be different from the original and delve into “a world of drone technology, fifth-generation fighters and the end of the era of dog-fighting.” “The Navy is very different now than it was in 1986,” said Top Gun: Maverick director Joseph Kosinski. “Back then, they hadn’t been in any war for 15 or 20 years at that point. The tone of that movie and what those guys were doing was very different. Now, the Navy’s been at war for 20 years. It’s just a different world now, so you can’t remake the first movie. It has to adapt.”

“That being said, I certainly want to recreate the experience of that movie, which gives you a front-seat into the world of Naval aviation and what it’s like to be in a fighter jet,” Kosinski said. “The approach is going to be appropriate for the times we live in.” Kosinski helmed TRON: Legacy and Oblivion, which starred Mr. Cruise.

Another integral aspect of the original Top Gun might be returning as well. Kenny Loggins is allegedly working on a new version of “Danger Zone” for the upcoming sequel. Loggins hasn’t released new music since 2009, which isn’t exactly a promising sign. Top Gun: Maverick flies into theaters on July 12, 2019. Let’s hope Maverick has taken the wisdom of Iceman to heart and learns that it’s not worth it to be dangerous and foolish.