As Tornado With 135-MPH Winds Destroyed His Neighborhood, ‘Fortnite’ Gamer Kept On Gamin’ 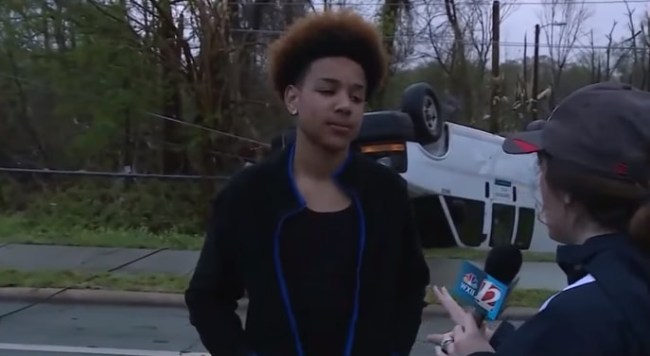 A strong EF-2 tornado ripped through Greensboro, North Carolina, this week. The powerful tornado had maximum wind speeds of 135 that flipped cars, knocked down trees, destroyed homes, left tens of thousands of people without power, and killed one person. However, Anton Williams wasn’t about to let a monster twister interrupt his game of Fortnite Battle Royale.

The local news station WXII 12 interviewed the teen after the killer storm and Williams detailed how he kept on gamin’ despite trees and power lines being ripped down all around him. “I was sitting at home and I was playing Fortnite and all the sudden I just heard a bunch of noise,” Williams told the reporter. “I looked out the window and I started seeing the roofs come off the houses in front of me. Then I sat back down because I only had a couple of people left in my game. I was going to try to finish the game.” Nevertheless, he persisted.

A local State of Emergency declared for Guilford County and eventually, the storm became so violent that Williams finally put down the controller. When the reporter asked the teen what was running through his mind as he huddled his sister and nephew into the bathroom to keep them safe, Anton responded, “Honestly, I was just thinking about the game.” Roofs are being torn off and vans are flipped, but hey let me try to help my squad get this “W.” A team player right there.