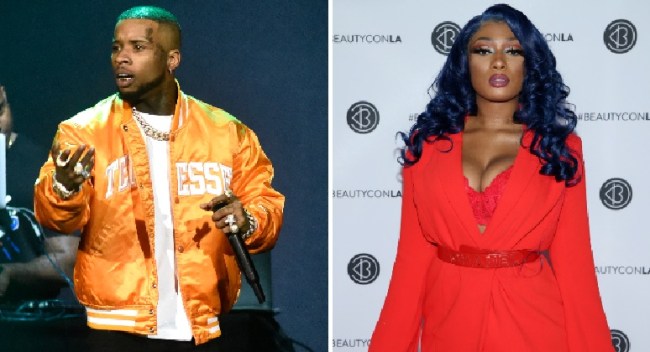 On Friday, Tory Lanez released a surprise album DAYSTAR in where he attempts to refute former girlfriend Megan Thee Stallion’s accusations that he shot her in the foot during an incident in July.

In several songs on the album, Lanez claims he never shot Megan and that her team is trying to set him up.

Girl, you had the nerve to write that statement on a affidavit
Knowing I ain’t do it but I’m coming at my truest
Trying to keep this sh*t 200 with you, shorty, I can’t prove it
But those people in your ear, they the true ones that I fear
They really got you thinking Tory Lanez would do you in for real
Don’t forget you was my b*tch, I held it down and kept it real
I would never paint no fake picture of you just for some mills
And I thought you was solid too, but look at how you doing me
Look at how you doing me, people trying to ruin me

Complex spoke to someone close to Megan who not only refutes Tory’s claims on the album but also provides more detail to what allegedly went down on the night that Megan was shot.

According to Complex’s source, Lanez pulled out a gun on Megan after she got out of the car during an argument. Lanez then allegedly told her to “dance, bitch” before starting to shoot at her direction. The source also claims Lanez tried to pay off Megan to keep her quiet after the incident.

Now, a source close to the situation is disputing Lanez’s characterizations, describing a very different scene.

“When she gets out of the car and says, ‘I’m just going to walk home,’ he pulls out a gun and says, ‘Dance, bitch,’ and he starts shooting her,” the source tells Complex.

The source also says that Tory offered hush money to Megan and Kelsey Nicole in the aftermath of the shooting, even as Megan was receiving medical treatment.

“As she’s going into surgery, this maniac is texting her,” the source says. “He’s basically trying to say he’ll pay. Her friend is [also] getting calls to receive money. He was trying to keep her quiet.”

Complex has reviewed Cedars-Sinai medical records from the aftermath of the incident, which are consistent with Megan’s story that she was shot in her feet, and mention shrapnel found in her heel.

The source says they are speaking out because the public response around Tory’s project has made people doubt Megan’s story and even mock her.

According to Complex Lanez is denying that he told Megan “dance, bitch” during the alleged altercation.