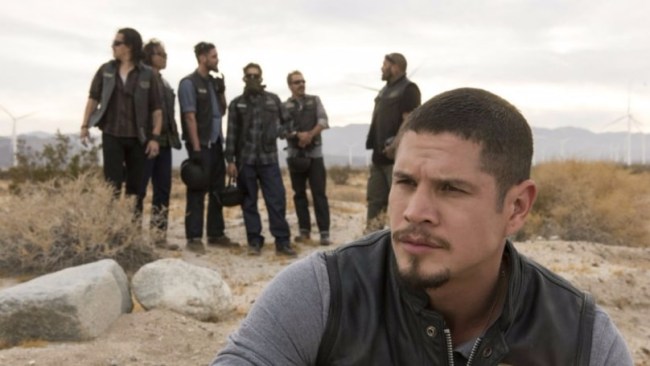 It has been 1,247 days since Sons of Anarchy rode off into the sunset (Not that we’re counting or anything). But we’re only a few months away from getting the brand new Sons of Anarchy spinoff titled Mayans MC. The colorful teaser trailer for the Mayans MC TV show that shows the Mexican motorcycle club painting the town black.

The first trailer for the upcoming FX show features the gang of bikers rolling down the highway and killing a field of red roses as a Spanish cover of the Rolling Stones’ 1966 classic “Paint It Black” plays in the background. “Fly our colors,” the trailer says.

Mayans MC is “set in a post-Jax world where EZ Reyes (JD Pardo), fresh out of prison, is a prospect in the Mayans MC charter on the California-Mexico border. Now EZ must carve out his new outlaw identity in a town where he once was the golden boy who had the American Dream within his grasp.”

Speaking of Kurt Sutter, he wants to tell many more Sons of Anarchy stories in the form of a sequel and a prequel. “I have a sense of Sons being four chapters,” Sutter said. “If Sons was the first chapter, then I see the Mayans as the second chapter. [The new show is] present day, it’s after the death of Jax Teller. We’re going to play the reality of that last day and the events that happened with who he killed that day and the impact and perhaps the trickle down that may have had on Northern Cali. So it won’t have a direct impact on the Mayans but we make reference to it in the pilot so we can play the reality of it.”

There will be a sneak peek at the series on June 8th at the ATX Television Festival in Austin, Texas. Then you can ride with the Mayans M.C. this fall on FX.