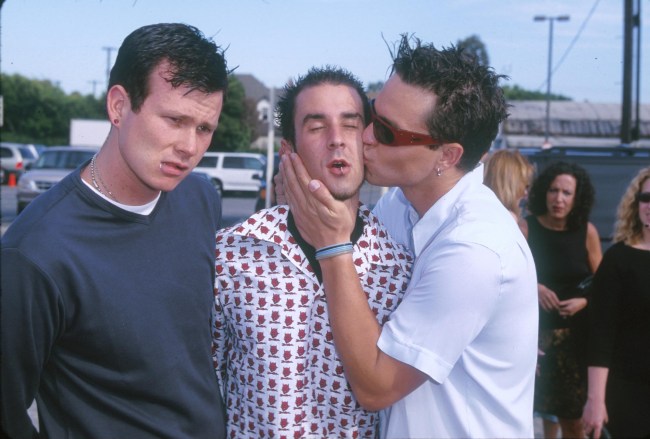 The part of every 90s baby that has been dead for over a decade recently awoke, yearning for baggy jeans and a Surge, all from one tweet from Travis Barker. The 42-year-old  Blink-182 drummer recently tweeted out a photo of his former lead singer’s face couple with the caption “Where are youuuuuu,” paying homage to the group’s 2004 gold certified hit “I Miss You.”

Within an hour, DeLonge tweeted additional lyrics to the song.

I am the voice inside your yeeeeaaaad

Many fans on Twitter choose to take this as a sign, a precursor of a reunion tour, but Barker could have very well just been hit with the nostalgia bug after yesterday bassist and co-lead vocalist Mark Hoppus unboxed his original, handwritten lyrics for the band’s iconic untitled album. One of the songs shared: I Miss You.

Looking in an old box I found my notebook from the @blink182 untitled album. pic.twitter.com/n05ThGfhNj

DeLonge famously left the band back in 2015 but in December 2017, he teased his return to the band, saying he had a meeting with Travis Barker and cryptically wrote, “yes Blinkies, we also talked a bit about other stuff.” Without him, the band released an album, 2016’s California, with Alkaline Trio‘s Matt Skiba.

After his departure form the band, DeLonge has taken the logical next step: chasing UFOs and hunting down aliens. The 43-year-old is head of a UFO company that’s reportedly $37.4 MILLION in debt after being awarded the prestigious ‘UFO Researcher of the Year’ award from OpenMinds TV in 2017. DeLonge adamantly refuted this claim, but judging by his spastic appearance on The Joe Rogan Podcast last year, it’s tough to take him at his word.

Regardless, Blink fans are choosing to believe that this small correspondence between former bandmates is the key that opens the door to an original Blink reunion tour. My oh my, that’d be great.

us OG Blink fans trying to figure out what this means pic.twitter.com/U9ZHbFrwbt