Co-Founder Of Blink-182 Has A UFO Research Company That’s Reportedly $37.4 Million In Debt 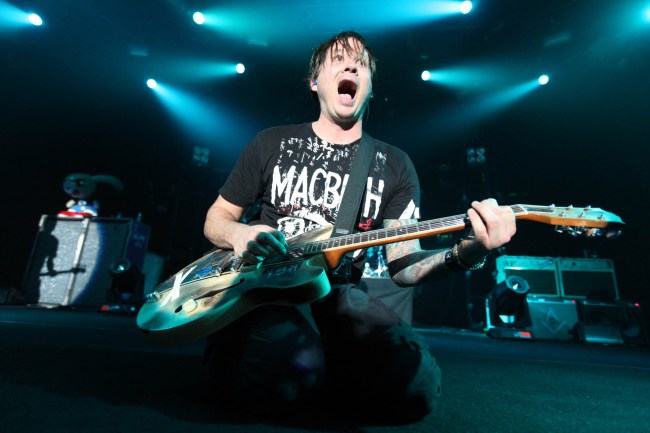 Tom DeLonge cofounded Blink-182 back in 1992 alongside Mark Hoppus and later Travis Barker (1995). He left the band in 2005 when they all split and then reunited in 2009. DeLonge reportedly quit the band abruptly at some point in 2014 but rejoined the next day, and in 2015 he permanently quit the band to spend more time with his family while Travis Barker and Mark Hoppus continued touring.

What’s he been doing to fill the gap now that he’s no longer a member of Blink-182, the band that’s sold over 50 million records worldwide? He’s chasing UFOs and hunting down aliens, obviously.

The 42-year-old DeLonge is currently the frontman/lead vocalist/guitarist of Angels & Airwaves but he’s also head of a UFO company that’s reportedly $37.4 MILLION in debt. In 2017, Tom Delonge was awarded the über prestigious ‘UFO Researcher of the Year’ award from OpenMinds TV. Here he is accepting his award:

His company, ‘To The Stars Academy Of Arts And Sciences,’ is dedicated to the pursuit and study of alien life. And according to Ars Technica, their most recent report filed to the SEC shows that they are $34.4 million in debt which puts the UFO company’s future in jeopardy.

“The Company has incurred losses from operations and has an accumulated deficit at June 30, 2018 of $37,432,000. These factors raise doubt about the Company’s ability to continue as a going concern.”

This report isn’t completely out of the blue, according to NME. They have tweets from Tom DeLonge last month which show him trying to raise money via crowdfunding for his UFO research.

Had 4 very big things happen this month at To The Stars Academy. Working on something that will be international in scope, and extraordinarily ambitious. Far from done, but the interest is there. Multiple countries, and TTSA leading the “build.” It takes time to change the world-

Investment at https://t.co/lIbZraNEDE closes on the 28th. Last chance to own it with us-

How legit is Tom DeLonge’s UFO research company? Actually, all things considered, it’s pretty legitimate. Remember last year when it was revealed that a secret Pentagon program existed that was funded by tens of millions of dollars with the goal of studying UFOs and alien life? It turns out that one of the directors of that program, Luis Elizondo, joined Tom DeLonge’s UFO academy last year lending a lot of credence to the program.

I’m sorry, I have to stop for a second and ask if I’m the only person who imagines all of these dudes going to work wearing tinfoil hats? How in the actual hell did this guy go from 1990s appearances on MTV’s Total Request Live with Carson Daly and headling The Warped Tour to trying to prove the existence of UFOs on earth? I’m just, really blown away by all this news.

I have to imagine that the reported $37.4 million debt is a pretty insurmountable figure for a UFO company but this is California we’re talking about so there’s the chance they could find some private investment to keep going.

Anyway, here’s Tom DeLonge on Joe Rogan’s podcast talking about the breakup of Blink-182 if you’re interested in how all that went down.