Travis Scott, Of All People, Has Already Seen ‘TENET’, Gives Shakespearean Review Of The Film 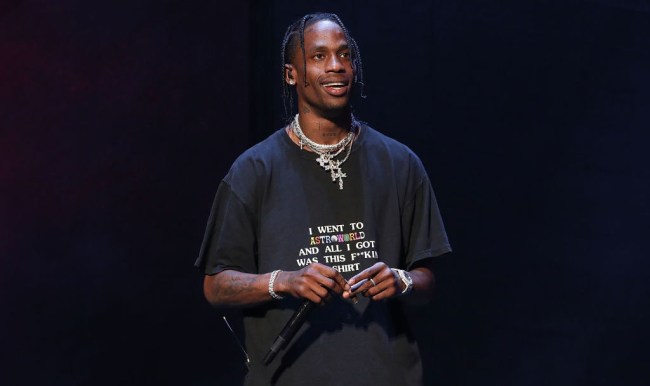 Remember that scene in The Wolf of Wall Street, where Leonardo DiCaprio (as Jordan Belfort, of course) explains that he ended up getting caught because of Benihana? “BENI-FUCKIN’-HANA!?” That’s sort of how I feel about Travis Scott — TRAVIS FUCKIN’ SCOTT — being one of the only people on Earth who’s been lucky enough to see Christopher Nola’s TENET.

Now, to be clear, this is nothing against Travis Scott: I’m not necessarily a fan of his music, but I can appreciate that most people think his shit bangs, and I also respect the fact that he won the Kylie Jenner lottery. As sick as she may make you (as she does me), she’s absolutely loaded in both proportions and wallet — that’s a win-win for Travis.

But, after fans across the globe have been denied the seminal movie event that is a new Christopher Nolan film for months now, hearing that Travis Scott has already seen John David Washington and Robert Pattinson moonwalk through time is akin to being kicked while we’re down. To make matters worse, Scott didn’t even offer us a taste of what’s to come, instead simply telling GQ Magazine that “he can’t even explain it.”

“I can’t even explain it. You literally just have to watch it. It’s very fire,” Scott opined.

Now, to be fair to Scott, he’s far from the only one who appears to not really have a grasp of what the actual fuck is going on in TENET, as both the cast and the film’s star, the aforementioned Robert Pattinson (who claims his grasp of the film is so weak he can’t even “bullshit” his way through a question about it), were so perplexed by Nolan’s eleventh directorial feature that the auteur had to “remain calm and patient” while answering their questions.

Anyway, long story short, or as the internet youths call it, TL;DR: TENET is going to fucking SLAP and I’m super jealous that Travis Scott has seen it and I haven’t. The end.

RELATED: Robert Pattinson Describing ‘Tenet’ As Christopher Nolan On ‘Steroids’ Is Bad News For Our Brains