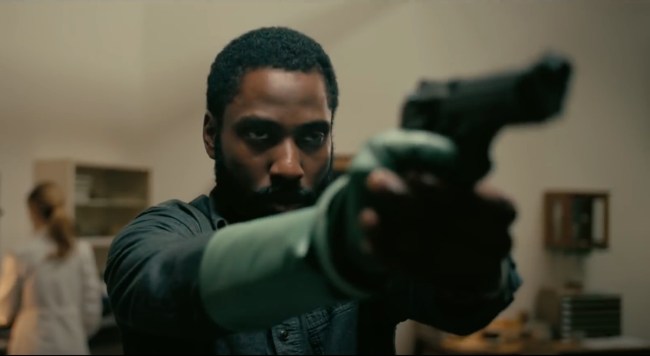 From everything we’ve heard thus far, it seems as though Christopher Nolan’s Tenet is set to reshape the movie industry. I mean quite that literally, as John David Washington, the film’s star, said that Nolan’s 11th directorial effort will inform the next “10 to 15 years” of filmmaking.

“There are just little nuggets of information and breadcrumbs about the movie that I’m surprised he was going to reveal, and I’m glad he did. This seems like something different. it seems like this is where he’s about to take us for the next 10 to 15 years of filmmaking,” Washington said.

Then, perhaps most hilariously, are the quotes from Robert Pattinson, the film’s co-lead. Despite the fact that Pattinson is one of the film’s two big stars, the soon-to-be Batman actor recently admitted that even he has difficulty describing the nature of the film.

The anecdotes of Tenet‘s sheer absurdity don’t stop there, as there are equally hilarious reports that Michael Caine — another longtime Nolan collaborator who has appeared in every single one of the auteur’s films since Batman Begins — also doesn’t know what the movie is about because, well, Nolan wouldn’t let the English acting icon see the script.

Combine all of that information with the mind-bending trailers and there’s only one conclusion that can be made: whether you love it or hate it, Tenet is going to explode your brain into pieces. It’s clearly already happened to the cast, as they were asking Nolan questions about the plot so frequently that he had to “remain very calm and patient.”

“Every day I had questions for [Nolan],” Washington said in a recent chat with video game host Geoff Keighley (via Digital Spy). “But he was very gracious, and he answered them very calmly and patiently. It was important that the actors could track the story correctly, so we could tell it the best way we could, and he was very patient with us. I say that very politely.” [via IndieWire]

Folks, if you thought Interstellar was an assault on your sense of reality, strap in, because all signs indicate that Nolan is going for the cerebral jugular this time.

In addition to Pattinson and John David Washington, TENET also stars Elizabeth Debicki, Aaron Taylor-Johnson, Michael Caine, Kenneth Branagh, Clémence Poésy, and Dimple Kapadia. You can also check out the first trailer for the film below.