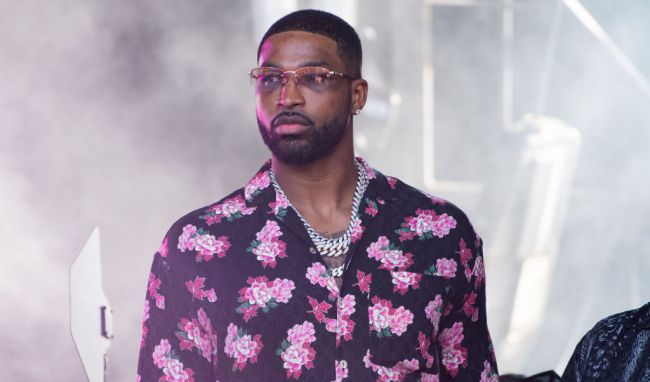 Tristan Thompson, as the youths have been saying ceaselessly for the last week or so, clearly has got that dawg in him, as the man simply cannot be stopped. Morning, noon, or night… Western Hemisphere or Eastern… at the club or in a bar, TT is out there chasing the tail of virtually anyone and everyone except Khloe Kardashian, his longtime girlfriend and baby mama.

The 31-year-old former champion — who had difficulty finding a permanent new NBA home during the 2022 season as he played for the Kings, Pacers, and Bulls over the course of the last year — was spotted partying with a bunch of women in Mykonos, Greece, just days after it was announced that he and Khloe Kardashian were expecting a baby together via surrogate.

According to the report from TMZ, Thomspon and Kardashian’s surrogate child will either be born “imminently” or might have already been born. Despite this, footage of Thompson shows him encircled by many women and holding hands with one of them.

Tristan Thompson — decked out in a floral-pattern shirt — was spotted walking hand in hand through the streets of Mykonos with a mystery woman around 5 AM Sunday morning. Tristan had previously been partying at a club called Bonbonniere … so it’s possible he met her while out. [via TMZ]

Thompson, of course, has been in an on-again-off-again relationship with the youngest of the three Kardashian sisters since 2016. Despite splitting up multiple times over the years, Thompson and Kardashian share a daughter together, who was born in 2018.

With his NBA career perhaps winding down — he was traded to the Kings in August 2021 before being shipped to the Indiana Pacers in 2022, who then bought out his contract — Thompson would perhaps be wise to do right by Khloe Kardashian this time.