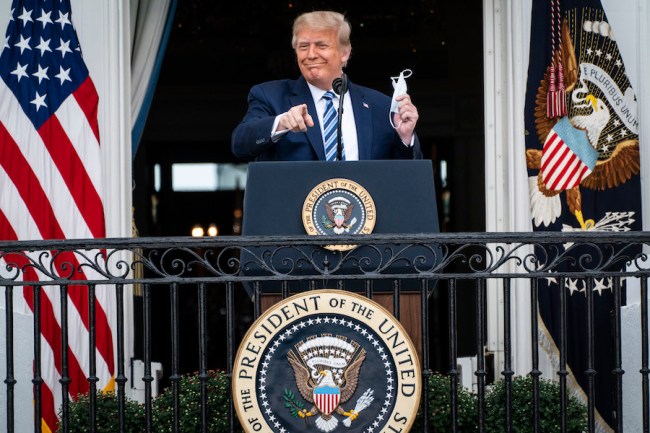 After his discharge from Walter Reed National Medical Center due to testing positive for Coronavirus, President Donald Trump wanted to show Americas he was feeling better during his first public appearance yesterday.

According to the New York Times, Trump considered ripping open his dress shirt to reveal a Superman logo.

The president initially wanted to act frail after being discharged from Walter Reed last Monday and revealing the Superman shirt “as a sign of strength.”

Trump ultimately decided against going through with the stunt or possibly his staff talked him out of the awkward photo-op.

White House Dr. Sean Conley said yesterday that “the president is no longer contagious,” allowing Trump to return to the campaign trail.

Trump returned to the White House on Oct. 5 and released a video message to Americans telling them “not to be fearful of the coronavirus.”

“I learned so much about coronavirus and one thing that’s for certain, don’t let it dominate you. Don’t be afraid of it. You’re gonna beat it. We have the best medical equipment, we have the best medicines — all developed recently,” Trump explained in the video.

This video was released after a clip of Trump having trouble breathing went viral and Claudia Conway, daughter of former Trump advisor Kellyanne Conway, said the president was “doing badly.”

Trump also stated in an interview with Fox Business Network that the reason he beat Coronavirus is that he’s in “such great shape” and a “perfect physical specimen.”