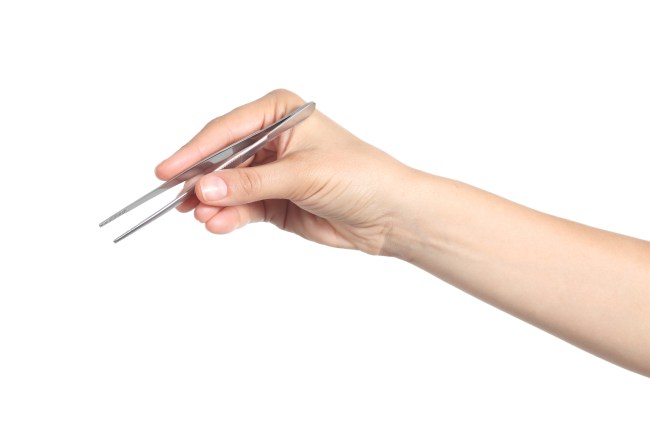 When I was in 3rd or 4th grade I was at a Summer Camp that had these wood handrails leading into the various buildings. I don’t remember why I did this, but I remember walking into some of the buildings I’d drag my arm along the top of the handrail. Probably because I was a little kid and about the same height as the rail at that point.

Well, one day I was dragging my arm along and got a fucking splinter the size of a cigarette lodged into my armpit and it was so large/painful that it had to be surgically removed by my doctor within the 24 hours. Now, I tell you this fucking weird childhood story of my stupid injury because that’s all I could think about when I came across this news below, how I was in so much pain from an XXXL splinter that it was gone within 24 hours.

This 22-year-old dude walked around for FOUR YEARS with a pair of tweezers stuck in his urethra. Dick tweezers. For almost half a decade. And he somehow survived. What the hell?!?!

How’d the tweezers get there? Well, he put them there himself according to this report from the NYPost and they remained there, embedded in his dong, for the next several years.

A 22-year-old man made the world wince after revealing that a 3-inch pair of tweezers was lodged in his urethra for four years.
The man, who has chosen to go unnamed, visited a clinic in Saudi Arabia where he disclosed that he inserted tweezers into his member four years ago, reports the Daily Mail.

An X-ray revealed the foreign object was lodged lengthwise in the patient’s urethra, with the tips embedded in the flesh. The cringe-inducing case was such an anomaly that the team of doctors documented it, with a write-up in medical journal Urology Case Reports by Dr. Mohamed Abouelazayem of England’s Royal Wolverhampton NHS Trust. (via)

I consulted a childhood friend of mine who is a surgeon now and asked him about how the hell this guy survived four years with these tweezers in his body.

He was mostly astonished that the man didn’t suffer any extreme side effects that usually accompany bizarre conditions like this.

His ailment sounded highly unusual, doctors noted, especially as he hadn’t experienced the fevers, chills or other urological symptoms associated with the condition.

According to the report, doctors were forced to squeeze the man’s penis using the “external pressure technique” in order to close the tweezers and prevent them from ripping his urethra. Afterward, they sent the man home with the recommendation that he undergoes a psychiatric evaluation, which he refused. (via)

According to the report on the Post, this is actually the second time in history that a male has been recorded with “open thumb metal forceps” stuck in his urethra.

As for why he did this, the report didn’t come to a conclusion but suggests it’s possible it was part of ‘sounding’ which is shoving ‘foreign objects’ into the body’s orifices in order to experience sexual gratification, oftentimes during the act of pleasuring one’s self.

For more on this bizarre story, you can click here to visit the Daily Mail.