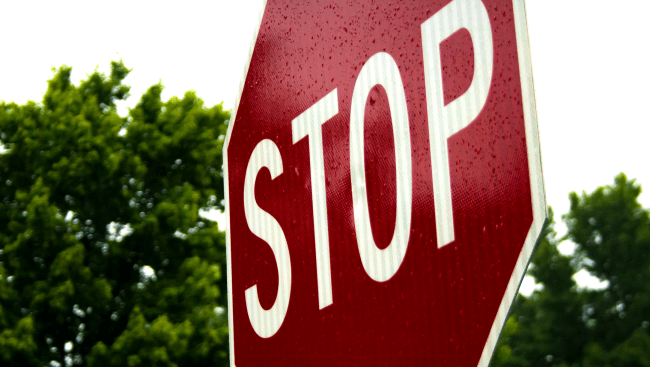 Many times there is little rhyme or reason for it happening. However, just as often, it occurs because it is just something so relatable that we can’t help but become invested.

Such is the case these days with a Twitch channel called Stopsigncam.

Stopsigncam is exactly what its name says it is: a cam focused on a stop sign – a stop sign in Salem, Massachusetts to be more specific.

The weird(er) part of this is that, according to the channel, “98.73 percent of vehicles don’t stop” at this particular small town stop sign.

Because it is abso-freaking-lutely compelling theater.

Imagine if you will, you and a group of say thousands of other viewers are tuned in to Stopsigncam, watching to see if anyone actually stops.

Over and over again you and your new friends watch as one car after another doesn’t stop.

It happens so much that you and the other viewers come up with terms for certain types of non-stoppers like “rollers” and “zoomers.” You share memes.

There is even a separate website that keeps track of the number of stoppers, rollers, forcers, zoomers, and walkers.

The suspense is palpable and occasionally, someone who follows the feed will even appear on the video and do something interesting.

Then, after all that waiting, someone actually STOPS and the crowd goes wild! THAT is why Stopsigncam has become so popular. It just sucks you in.

“At first, I thought it’d just be a little fun joke between me and my audience on Twitter for only [one] night, because I deleted my tweet hours later,” 100 Thieves intern JhbTeam, who helped make the channel go viral, told Kotaku in a DM. “When people actually stayed and watched it throughout the night, it made me want to create the TikTok to see if I could make it bigger. I went to bed that night when it had 400 viewers, and woke up to 4,000 viewers as well as my TikTok having 800k views in only a few hours. I’m very happy with the result of the TikTok because it was my ultimate goal to make it popular, and it became more popular than I imagined.”

As longtime viewer Daniel Connolly told Kotaku, “It feels like an ephemeral moment in a tiny, weird corner of the internet.”

That it most certainly is. At least for now.