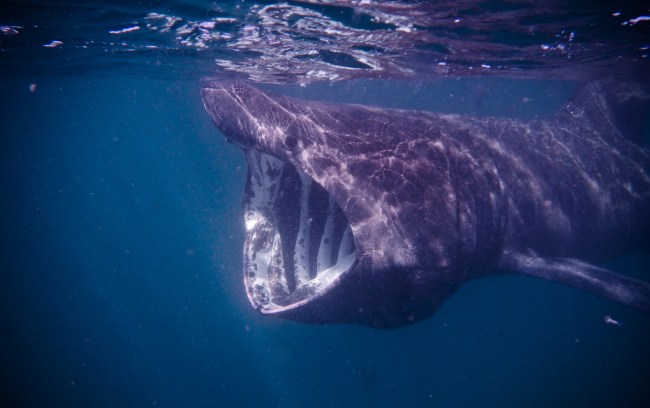 California is home to some of the largest species of animals in the world. They’ve got bears and elk, cougars and coyotes. In the water, the coast of California is a busy highway for whale migration with Gray Whales passing by Big Sur and the Blue Whale migrating past the Channel Islands National Park (among other various whale species).

The Great White Shark measures out to 23-feet-long. The largest shark in the world is the Whale Shark which measures up to 46 feet in length. In between those two is the Basking Shark which averages out to 33-feet when fully grown but one caught in Canada’s Bay of Fundy back in 1851 measured 40.3 FEET LONG and weighed an estimated SIXTEEN TONS.

Basking Sharks are massive but they’re rarely seen in California. In fact, they’ve all but disappeared for the past 30 years despite being a regular fixture of the past. Scientists have reason to hope that these sharks are returning after two were sighted within days of each other just off Marina Del Ray.

“It was a very special thing,” Captain Skip Rutzick, who is in charge of The Duchess Yacht Charter Service in Marina del Rey, told local magazine The Argonaut. “I’ve been on the ocean 1,000 times in the last five years and I’ve seen many whales, I couldn’t tell you how many thousands of dolphins, and the very rare ocean sunfish the Mola mola—but to see a basking shark was very special.”

The two sightings took place in almost exactly the same location—around three to four miles off the south-facing Malibu coast—on March 31 and April 20. Both incidents were caught on camera by the crews of the vessels involved. (via)

Just try and appreciate how ABSOLUTELY ENORMOUS this thing is:

A lot of times, when a rare species is ‘spotted’ anywhere it hasn’t been for decades it’s someone who misidentifies the species because they don’t know any better. You see this a lot with people claiming to have seen wolves that turn out to have just been coyotes. In order to confirm that these were actual basking sharks they brought the footage to the experts.

In order to confirm that the animals were indeed basking sharks, the images were shown to underwater photographer and marine life expert Brad Wilbourn. Based on their behavior and the size of their body parts, he suggested that both were basking sharks measuring between 20 and 25 feet.

“They were moving very, very slow,” Wilbourn told The Argonaut. “Basking sharks are very slow and lumbering, and they really take their time because they’re filter feeders—their mouth is wide open and they’re gathering whatever plankton they can get ahold of.” (via)

Basking sharks can be found in the oceans all across the planet but they are rare all over. They prefer cooler water (46 to 58-degrees Fahrenheit). They can move down to depths of up to 3,000-feet in the ocean and they’re extremely slow moving at around 2.3 MPH so they’re hard to find but when you do spot one then chances are you’ll get a pretty good look because it’s not going anywhere in a hurry.

According to Newsweek, the numbers of Basking Sharks plummeted due to fishing and eradication programs and it’s been 30+ years since these sharks have been spotted in actual numbers instead of just one-off super rare sightings.