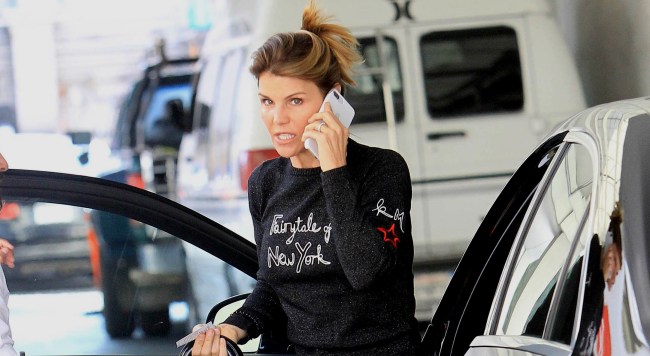 A recruiting poster for the USC women’s crew team might help Lori Loughlin get a not guilty verdict in the Operation Varsity Blues college admissions scandal. Key word being “might.”

Loughlin, who was just written out of her Hallmark show and is facing up to 40-years in prison after rejecting a plea deal, has thus far basically been going with the “we didn’t know we were breaking any laws” defense, can use all the help she can get.

Even more so now that a Federal criminal investigation has reportedly been opened up against one of her daughters for her part in the case.

Loughlin and her husband Mossimo Giannulli stand accused of paying someone $500,000 and having their daughters Isabella and Olivia Jade Giannulli pose as USC crew team recruits in order to gain admission to the school.

Over the weekend, a poster looking to recruit walk-ons to the USC women’s rowing team popped up and it might turn out to be of some assistance in Loughlin’s defense, reports TMZ.

No, that is not a joke directed at Loughlin and family, it’s real.

A USC alum who was actually a coxswain at the university tells us women’s rowing teams often recruit potential teammates who have zero experience in the sport — which is kinda what Olivia Jade and Isabella were coming to the table with.

Typically, the way it works is that you already have to be a student to qualify for the team … it’s not for some random people on the street who want in at USC.

But, here’s the thing … in Lori’s case, prosecutors have to prove criminal intent to seal a conviction. Sources connected with Lori’s defense claim Lori didn’t know the $500k payoff was shady, even if the plan was to pretend her daughters were crew-team ready. The poster would seem to help Lori and her husband, both of whom are charged with multiple felonies, because crew experience doesn’t seem to be essential.

In related news, Page Six reports that Loughlin and her husband are still in denial about the very real possibility that one or both of them will end up serving time in prison.

Fixers from two [crisis management] firms told CNN they’ve been approached by the former “Full House” star and her hubby, Mossimo Giannulli, to contain the fallout from their arrests for allegedly paying $500,000 to bribe their daughters’ way into the University of Southern California.

But even they think the couple should be more focused on their actual court case than the court of public opinion.

“I truly believe she thinks she’s going to not serve jail time and return to work.”

Lori Loughlin really is living in an alternate reality.