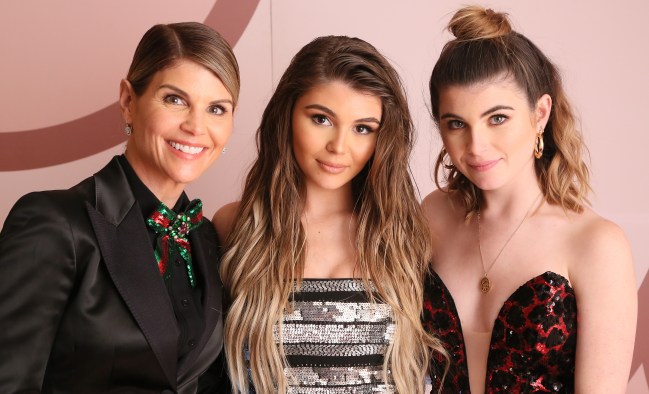 Well… if Lori Loughlin is “outraged” that people have been calling her and her family “cheaters” because of the college admissions bribery scandal, then this new report about one of her daughters is going to make her REALLY upset.

As you may recall, Loughlin and fam are so far come off as being very delusional with regard to the charges they are facing. They reportedly thought prosecutors were “bluffing” and have even gone so far as to claim that while they thought they might have been breaking some rules, they did not realize they were breaking the law when they had their two daughters, Olivia Jade and Isabella Giannulli, pose as fake crew recruits and paid $500,000 for the two of them to gain admission to USC.

Loughlin and her husband Mossimo Giannulli also reportedly “don’t appreciate the backlash” over their alleged involvement in the scam. Womp, womp…

Loughlin also is reportedly very concerned that her daughters will have to testify because that would “traumatize them even more.”

So I wonder how she feels about a new report which reveals that in addition to the possible prison sentences facing her and her husband, now one of her daughters is the subject of a Federal criminal investigation as a part of the college admissions scandal.

Multiple sources tell DailyMail.com that one of the actress’ daughters received a target letter from federal prosecutors in Massachusetts earlier this month regarding the Operation Varsity Blues investigation.

That letter informed the embattled University of Southern California student that she was the subject of an investigation which could result in criminal charges.

No students have been charged or arrested at this point in the investigation, but court documents make it clear that some of the youngsters were aware of the illegal actions being carried out in their behalf.

‘It is a not-so-veiled threat,’ said one source who has seen the letter.

‘[The US Attorney’s Office for the District of Massachusetts] is making it pretty clear that they have evidence that very strongly suggests she knew of the illegal plot.’

They do not say whether the daughter in question is Olivia Jade Giannulli or Isabella Giannulli and a spokesperson for the US Attorney’s office declined to comment, nor did a lawyer for Loughlin.

One of the sources said that target letters have been going out for the past month as prosecutors work to obtain evidence in the case and pursue additional charges and defendants.

These latest target letters seem be less concerned with gathering information in the case said that source, who described the notes as ‘warning shots’ to the students.

‘It is clear that some students are going to be charged,’ said the first source.

That individual then added that they know five people who have received letters similar to Loughlin’s daughter, noting that in all five cases the parent’s refused a plea deal and later filed a plea of not guilty.

Just spitballing here, but if both daughters posed for fake USC crew photos then there is a pretty solid chance that they had some idea what their parents were doing.

And… if it’s Olivia Jade that prosecutors are going after then Aunt Becky might be going to be spending some time in a VERY full house in the not-so-distant future.