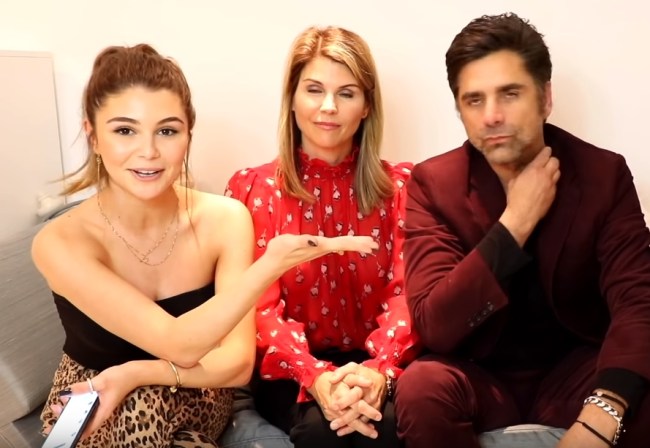 Since the college cheating scandal that broke last week, Lori Loughlin, her husband Mossimo Giannulli, and their daughters Olivia Jade and Isabella Rose are facing the consequences of being involved in the nationwide bribery scam. More new details about Loughlin and her daughter Olivia Jade Giannulli involvement in the college admission scandal are surfacing.

The entire Loughlin-Giannulli Family have bunkered down in their Bel Air, California home a source tells People. “They are living in the moment and that’s all they can do right now. For them, this is all still a nightmare.”

“Lori and Mossimo both have court dates in Boston next week. It’s still a very stressful time for them all,” the source adds. The case against Loughlin, 54, and Giannulli, 55, is that they paid William “Rick” Singer’s Key Worldwide Foundation $500,000 to bribe a crew coach at the University of Southern California to add their daughters to the team so they could attend USC despite having no experience rowing.

Loughlin and Giannulli were arrested and charged with felony charge of conspiracy to commit mail fraud and honest services mail fraud. They were released on $1 million bond each and have not entered their pleas for the case. Last week, 50 people were indicted as part of an alleged nationwide scheme to get kids into universities they didn’t deserve to be accepted into.

“She has been passionate about her career and wanted to work and was doing well but that wasn’t enough,” the report states. “Her parents said she would have to juggle college and her career. Now she’s devastated because everything she built implode before her eyes. She feels they ruined everything.” How much do her parents regret paying half of a million to get their daughter into USC and now they potentially could go to prison because of it? Probably the best example of buyers remorse ever.

The 19-year-old Olivia Jade has nearly 2 million subscribers on YouTube and over 1.4 million followers on Instagram. She lost major endorsements with beauty supply companies since it was revealed her parents bribed her way to USC.

Meanwhile, her 20-year-old sister Bella is upset that she isn’t at school that her parents paid good money to get her into. Bella “was far more invested in college and would loved to have completed USC,” the source said.

Olivia Jade and Bella dropped out of USC after the college cheating scam broke because they were afraid of getting “bullied.” “They don’t plan to return to USC,” a source said. “Right now, they are just focused on getting through this ordeal. The girls are not talking about future plans. They are more focused on what’s next for their parents.”

Lori Loughlin got booted from the Hallmark Channel and her Full House character Aunt Becky was also written out of the final season of Fuller House.

“In [Lori’s] mind, the end result made everything she had to do worth it,” a source told US Weekly. “And she really didn’t even see it as being a huge deal.”

“Lori and Mossimo are finding out quickly who their real friends are,” the source added. “It’s not like they are the victims of a crime. They are the crime.”

“Many of their friends don’t want to be associated with them right now,” the source revealed. “Their friends are shocked at the allegations.”