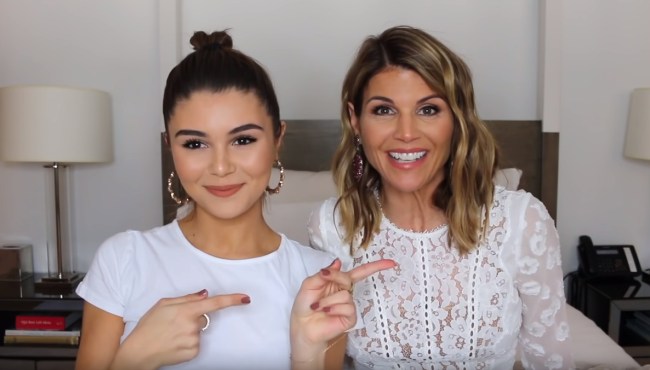 A video published on Oliva Jade’s YouTube channel on December 22, 2017, that starred her mom is coming back to haunt Lori Loughlin. in the video, Olivia Jade quizzed her 54-year-old mom on “cool, hip” lingo such as “fire,” “thot,” and “finesse.” If only Olivia Jade had a quarter of the enthusiasm for slang language tests as the SATs. The YouTube inlfuencer also tested her mother’s knowledge of Jake Paul lyrics.

In the video titled “TEACHING MY MOM SLANG TERMS OF 2017,” Olivia Jade asks the Full House star about the lyric “England is my city” in Jake Paul’s It’s Everyday Bro track. Loughlin points out that England is not a city and her daughter responds, “I know, that’s why it’s so, so, so iconic on YouTube! … Well, it’s not iconic at all, it’s just really dumb.”

Then Loughlin jokes, “If you would have said, ‘England is my city,’ I would say, ‘Why did I pay all this money for your education?’” See it’s funny because it’s true since Loughlin paid $500,000 to bribe a crew coach to get her daughters into USC!

Since the college cheating scandal was exposed by federal agents in the Operation Varsity Blues last week, Loughlin has lost her gigs at Hallmark and Aunt Becky will most likely be written off of Fuller House and won’t appear in the final season.

Another video has come back to bite Olivia Jade Giannulli that points out how much she hated school and just wanted to be a YouTube personality. A video titled “MY LAST DAY OF HIGH SCHOOL” from May 22, 2018, Olivia Jade said that in the past year she was “literally never at school.” She also jokes, “Maybe they forget I go there!” Which may have been the reason she needed her mother and father to pay half of a million dollars to William “Rick” Singer’s Key Worldwide Foundation to get her into USC.

In another video, Olivia Jade stated, “I don’t know how much of school I’m gonna attend. But I’m gonna go in and talk to my deans and everyone, and hope that I can try and balance it all. But I do want the experience of like game days, partying. I don’t really care about school, as you guys all know.”

The 19-year-old YouTube influencer has lost key endorsements from beauty companies following the bribery scandal that allowed her to get accepted into USC over more qualified students. Olivia Jade and her older sister Bella have since dropped out of USC for “fears of bullying.”

Lori Loughlin and her fashion designer husband Mossimo Giannulli were each released on a $1 million bond. Loughlin, Giannulli and fellow actress Felicity Huffman are expected to appear in court on March 29.

On the bright side, this whole college cheating scandal has brought more awareness of Olivia Jade’s YouTube and Instagram accounts, and in the end, isn’t how many followers you have on social media more important than some silly degree from the University of Southern California?