Hallmark Drops Lori Loughlin, Her Daughter Olivia Jade Loses Endorsements And Drops Out Of USC For Fears Of Bullying 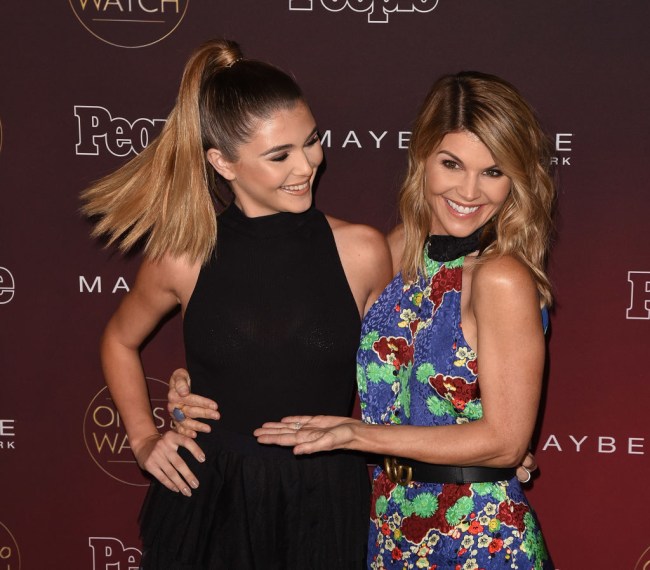 Lori Loughlin and her daughter Olivia Jade Giannulli are already getting slammed by the consequences of being entangled with the cheating college scandal that has rocked the nation. Talk about your all-time backfires.

On Tuesday, federal authorities announced that they had caught 50 people, including 33 parents, involved with a scam to bribe proctors, school administrators, and university sports coaches to get kids into schools they would not have been admitted to on their own merits. The nationwide scandal was exposed in an investigation properly titled “Operation Varsity Blues.”

Loughlin and her fashion designer husband Mossimo Giannulli, allegedly paid $500,000 to guarantee that their two daughters would be admitted into the University of Southern California. The parents paid the bribery money to William “Rick” Singer, the ringleader of the reported scam.

Loughlin and Giannulli paid the money to Key Worldwide Foundation, a fake “non-profit college counseling service” started by Singer. The organization used the money to bribe various power holders to get rich kids into college. Between 2011 and 2018, the Key Worldwide Foundation took in $25 million from desperate parents thirsty to give their children an advantage in college.

Singer and his group made it seem as though Loughlin’s daughters, Olivia Jade and Isabella Rose, were top recruits for the crew team at USC. When in fact they were not rowers in the least bit. Key Worldwide even arranged for Aunt Becky’s daughters to have photos of them pretending to be rowers.

On Tuesday, Lori Loughlin and Mossimo Giannulli were charged with conspiracy to commit mail fraud in connection with the college cheating scandal. On Wednesday, Loughlin and Giannulli were released on a $1 million bail. On Thursday, Hallmark’s parent company, Crown Media, dropped the Full House actress. I’m told that Loughlin had been a staple of Hallmark programming.

“We are saddened by the recent news surrounding the college admissions allegations,” Crown Media Family Networks said in a statement. “We are no longer working with Lori Loughlin and have stopped development of all productions that air on the Crown Media Family Network channels involving Lori Loughlin including Garage Sale Mysteries, an independent third party production.” Play stupid games, win stupid prizes.

The bribery scandal gets worse for Lori Loughlin’s family because her daughter lost major endorsements from companies who advertised with her. On Thursday afternoon, beauty product chain Sephora announced that they would no longer work with Olivia Jade. The hair product company TRESemmé also booted Giannulli.

Olivia Jade has had sponsorships and advertising relationships with brands such as Amazon, Dolce & Gabbana, Lulus, Marc Jacobs Beauty, Smashbox Beauty Cosmetics, Smile Direct Club, Too Faced Cosmetics, and Boohoo. Those are all in danger of going bye-bye.

Olivia Jade is a social media influencer with nearly 2 million subscribers on YouTube and over 1.4 million followers on Instagram (whether her wealthy parents bought her followers is another question). She even had her own cosmetics products with Sephora, which rolled out in December. But that relationship is gone after she was involved with the cheating scandal.

TMZ is reporting that 19-year-old Olivia Jade and her 20-year-old sister Isabella will not be returning to USC, which is the whole entire point of her parents committing federal crimes, which could land them in prison for up to 46 months.

The two USC students will not be returning to USC for “fear of being viciously bullied” according to sources. Sitting next to students who earned their way into college and didn’t have mommy and daddy pay for it, might have something to do with the sisters not going back to school too.

TMZ’s sources say Olivia Jade “is a mess, despondent and feeling like it’s the end of the world.” Both sisters will allegedly “lay low” and not attempt to enroll at another school for a while. Guess that means no more trips to the Bahamas on the yacht owned by the chairman of USC’s board of trustees.

Last year, Olivia Jade said she wasn’t interested in school for academics, but rather for partying. “I don’t know how much of school I’m gonna attend,” she said in a YouTube video in August. “But I’m gonna go in and talk to my deans and everyone, and hope that I can try and balance it all. But I do want the experience of like game days, partying. I don’t really care about school, as you guys all know.”

“Olivia and Isabella never really wanted to go to USC,” TMZ is reporting. “Our sources say they liked the concept of school principally because of partying, and had their sights set on Arizona State University.”

So all she wanted to be was an influencer, but her parents forced her to go to school, and now her entire influencer platform is being demolished because her parents bribed crew coaches to get her into USC. If you didn’t believe in karma before, you might now.