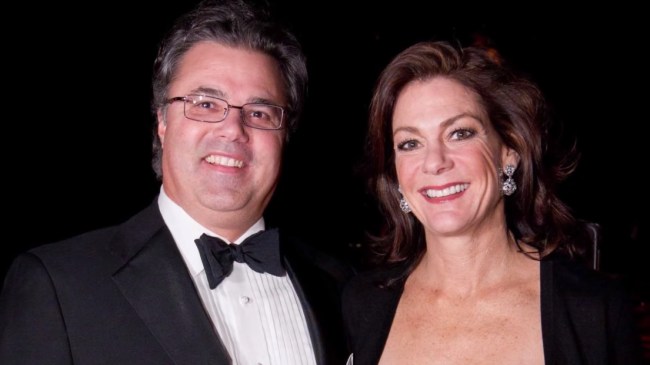 It’s not just Hollywood actresses Lori Loughlin and Felicity Huffman, who are entangled in the college cheating scandal. A rich CEO paid nearly $1.5 million to get his daughter into Georgetown University. This makes me doubt whether my parents truly love for me.

Manuel Henriquez is the founder and CEO of Hercules Capital, a venture capital firm that claims nearly $2 billion in assets under management. Henriquez was paid $8,235,700 in 2017 and lives in a $12 million home in Atherton, California, which is the 25th most expensive area in the country with median sales prices of $1,950,000. So you could go out on a limb and say Manuel Henriquez is wealthy.

Manuel and Elizabeth Henriquez allegedly paid more than $25,000 for someone who manipulate their daughter, Isabelle's S.A.T. Score; according to the indictment, Isabelle and her mother "gloated" that they "had cheated and gotten away with it" https://t.co/7dIwrngpmA pic.twitter.com/Lkq6KpCysz

Henriquez wanted his daughter Isabelle to attend Georgetown University and was willing to pay for the privilege of doling out $54,104 in tuition for the distinguished school. First, Manuel and/or his wife Elizabeth contacted William “Rick” Singer, the mastermind behind the college cheating scandal that was exposed in the nationwide federal investigation named “Operation Varsity Blues.”

Manuel used the Henriquez Family Trust to “donate” $400,000 to Singer’s Key Worldwide Foundation, the “non-profit” organization that bribed administrators and college coaches to get rich kids accepted into schools they probably wouldn’t get accepted into on their own.

Isabelle Henriquez was able to take her SATs with a proctor that was not from her private college-prepar­atory school and selected by Singer and flown in by Manuel. “Unbeknownst to the school,” the proctor “sat side-by-side” with Isabelle during the exam and provided her with answers.

The proctor was paid off by Singer to make sure that Isabelle’s SAT scores improved and they did. Isabelle received a score of 1900 out of a possible 2400 on the exam, which was an improvement of 320 points over her previous best score.

After overseeing the SAT test, the proctor “gloated with Elizabeth Henriquez and her daughter about the fact that they had cheated and gotten away with it,” according to the criminal complaint. One would surmise that the Henriquez family is not gloating today.

However, that score alone would probably not get Isabelle into Georgetown University, so her dad opened up his checkbook again to ensure her admittance to the school. With the help of Singer’s corrupt Key Worldwide Foundation, Manuel Henriquez paid off Georgetown’s tennis coach.

At the time, Gordon Ernst was Georgetown University’s head tennis coach. The Key Worldwide Foundation paid Ernst $950,000 for Isabelle to designate Isabelle as a tennis recruit.

Isabelle was then instructed to rewrite her college application and make it more about her tennis experience. Isabelle reworked her application to say she spent “three[-to-]four hours a day grinding out on and off court workouts with the hopes of becoming successful enough to play college tennis especially at Georgetown.”

In the application, which was submitted on October 25, 2015, Isabelle falsely stated that she played “club tennis” for 20 hours per week, 52 weeks a year, and was on the U.S. Tennis Association’s All-Academic Team.

She also said that she was ranked in the top 50 high schoolers on the USTA Junior Girls Tennis for three years, which was also a lie. “At her best, she appears to have ranked 207th in Northern California in the under-12 girls division, with an overall win/loss record of 2-8,” the complaint reads.

Ernst was paid $2.7 million in bribes by parents between 2012 and 2018 through Singer’s shady organization to put 12 students on the Georgetown Tennis team, some of which never played tennis. Ernst had made a name for himself and was even the tennis coach for President Barack Obama’s family.

“Ernst carries three titles of his own these days — head men’s and women’s coach at Georgetown University, executive director of Vineyard Youth Tennis and the personal instructor for First Lady Michelle Obama and her daughters, Malia and Sasha,” the Providence Journal wrote back in 2015.

Ernst was employed as Georgetown’s head men’s and women’s tennis coach from 2006 until December of 2017. On Tuesday, a university spokesperson told The Georgetown Voice that Ernst left his role “following an internal investigation that found he had violated University rules concerning admissions.”

He left to be the current women’s tennis coach at the University of Rhode Island, where he is paid a “substantially lower salary.” On Tuesday, Ernst was placed on administrative leave at the URI after news of the college admissions scandal broke. Gordon Ernst is accused of conspiracy to commit racketeering while he was employed at Georgetown University.

Less than two weeks after her revised college application, Isabelle received a letter from the university stating that Georgetown administrators had reviewed her application at the request of Ernst and her admission was “likely.” Isabelle was admitted to Georgetown University and is now a junior at the prestigious school where she majors in Spanish.

“In a now-deleted post on a blog for a sociology class, she wrote that she is ‘very self-motivated’ and has ‘a good moral compass’ when choosing friends,” according to the New York Post. This is pretty much the opposite of a “good moral compass.”

Isabelle’s now-deleted LinkedIn page said that she interned for her father’s firm in 2018. On her LinkedIn page, Isabelle also said that she is “a rapid learner” who enjoys “finding the problem and taking a step back to observe all possible solutions,” according to the Daily Beast. We would all be a rapid learner if someone sat next to us and gave us all the answers.

Isabelle Henriquez is one of the only students accused of knowingly participating in the #CollegeCheatingScandal — and now her Georgetown degree may be in jeopardy. My latest: https://t.co/3lE0wPRJGp

She is currently an investment-banking intern at Compass Point Research & Trading and is expected to be a wealth-management analyst at Big Apple financial-services company Jefferies this summer. Those sound like pretty good intern gigs that you probably can only get if you were smart enough to get into Georgetown.

Georgetown did not say if Isabelle Henriquez would be expelled or not for her involvement in the bribery scam, but did say they are “reviewing the details of the indictment and will be taking appropriate action.”

The stock price of Hercules Capital fell 9 percent on Tuesday following the news of Manuel Henriquez being involved in the nationwide bribery scam. Manuel and Elizabeth are charged with conspiracy and fraud for their roles in bribing to get Isabelle and another daughter into college.

The wealthy couple helped their younger daughter cheat on ACT and SAT exams. Manuel had “voluntarily stepped aside” as chairman and CEO of Hercules Capital. Manuel and Elizabeth turned themselves into authorities on Tuesday and were released on $500,000 bond each.