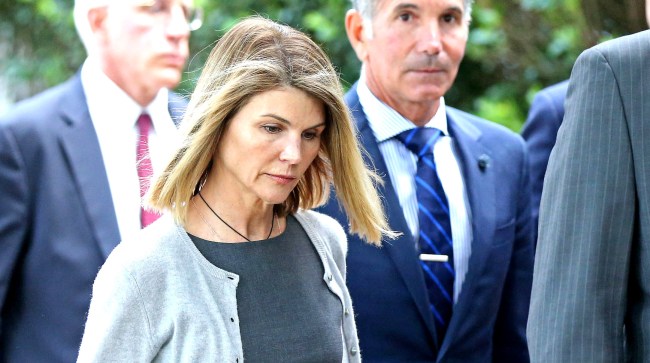 We knew it was coming, we just didn’t know when. Now we do. Netflix just released the first trailer for their upcoming documentary Operation Varsity Blues chronicling the USC college admissions scandal that sent Full House star Lori Loughlin, Desperate Housewives actress Felicity Huffman and several others to prison.

“Everything you’ve heard is true. But you haven’t heard everything. Using real conversations recreated from FBI wiretaps the filmmaker behind Fyre brings you Operation Varsity Blues: The College Admissions Scandal,” Netflix tweeted.

Yeah… those wiretapped conversations where Lori Loughlin and others trying to scam their way into getting their kids accepted to college are pretty insane.

“Operation Varsity Blues,” directed by Chris Smith, will debut on the streaming service on March 17, 2021. The film promises to provide a deep dive into the methods used by Rick Singer to get the children of his wealthy clients into top schools. These schemes included everything from enabling kids to cheat on their college admissions tests to falsifying sports credentials or bribing school officials.

Smith is best known for directing the Netflix documentary Fyre about Billy McFarland and the debacle that was the Fyre Festival. He also was an exectuive producer on Netflix juggernaut Tiger King: Murder, Mayhem and Madness.

Operation Varsity Blues will use a combination of interviews and recreations of the wiretapped conversations between the man running the scam, Rick Singer, and the parents trying to weasel their kids way into college.

An examination that goes beyond the celebrity-driven headlines and dives into the methods used by Rick Singer, the man at the center of the shocking 2019 college admissions scandal, to persuade his wealthy clients to cheat an educational system already designed to benefit the privileged.

Using an innovative combination of interviews and narrative recreations of the FBI’s wiretapped conversations between Singer and his clients, Operation Varsity Blues offers a rare glimpse into the enigmatic figure behind a scheme that exposed the lengths wealthy families would go to for admission into elite colleges, and angered a nation already grappling with the effects of widespread inequality.

Everything you’ve heard is true. But you haven’t heard everything. Using real conversations recreated from FBI wiretaps the filmmaker behind Fyre brings you Operation Varsity Blues: The College Admissions Scandal pic.twitter.com/kwsqTCSkqq

Are Felicity Huffman and Lori Loughlin going to play themselves?

One can only hope. They do need the work, after all.