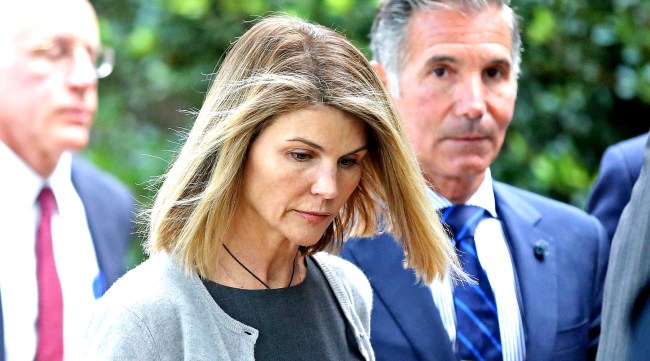 Lori Loughlin surrended to authorities on Oct. 30 and after just a few days inside a California federal prison she is already reportedly a “wreck.”

The 56-year-old Full House star and her husband Mossimo Giannulli pleaded guilty in May to conspiring to pay a $500,000 bribe to get their daughters Isabella and Olivia Jade Giannulli into USC.

Prior to her incarceration, Loughlin was reportedly “scared to death” of catching coronavirus in prison.

Following her plea, Loughlin was successful in getting approval from a judge to serve her time at a cushy prison that offers yoga, pilates, origami, and music lessons.

Unfortunately, despite that ruling, Loughlin is currently serving her time in the Federal Correctional Institution in Dublin, Calif. and, according to Us Weekly, it’s reportedly not going well for her.

“Lori really went into prison strong, she had her faith and the support of her family, but the first few days and road ahead are daunting,” the source tells Us.

A second source adds that Loughlin, 56, has been a “wreck.”

“Lori tried her best to be brave and look at the end result but there was nothing that could dissipate her fears,” the source says about the Full House alum’s state of mind in recent weeks. “It’s only two months but she’s dreading it. Her mind keeps telling her that something will go horribly wrong in prison or that her stay could be prolonged.”

The Federal Correctional Institution in Dublin (FCI Dublin) is the same facility where Felicity Huffman served her grueling 11 day sentence.

It offers numerous employment opportunities including working in a call center, in the manufacture of custom draperies, parachutes, and disaster blankets, and sorting and repairing USPS mailbags.

FCI Dublin has a design capacity of 250 inmates, but currently is the home to 882 prisoners. On the plus side, basketball, volleyball, track, softball, and tennis facilities are provided.

Loughlin was also ordered to serve two years of supervised release, perform 100 hours of community service and pay a $150,000 fine.

Her husband Mossimo Giannulli, 56, was sentenced to five months in prison, a $250,000 fine, and must perform 250 hours of community service.