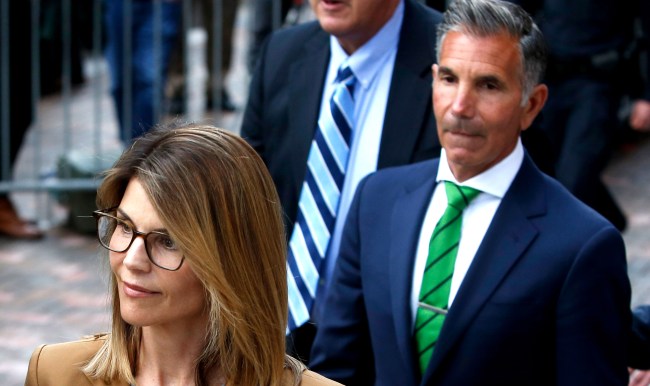 Since we don’t have anything actual games to watch, one of the next best things to a spectator sport currently taking place has to be the ongoing case of former Full House star Lori Loughlin and her husband Mossimo Giannulli versus the federal government in the college admissions bribery scandal.

Just as Loughlin and Giannulli seemed to be miraculously turning the tide with evidence of the FBI allegedly coercing a snitch and the judge accusing USC of being complicit in the scandal, the feds dropped a bombshell in the form of their daughters Isabella and Olivia Jade posing for photos rowing.

Add that to the fake crew resume they used to portray one of their daughters as a USC crew recruit – a sport neither of the girls ever participated in – and it looks like momentum is once again swinging back in the prosecution’s favor.

Pushing that momentum even further, this week it was revealed in court documents that Isabella and Olivia Jade’s father Mossimo allegedly berated a high school guidance counselor for daring to question the girls’ rowing exploits (because they didn’t have any).

Fashion designer Mossimo Giannulli confronted the counselor, identified by the Los Angeles Times as Philip Petrone, at Marymount High School in Los Angeles, the girls’ school, in 2018, according to the documents filed this week in the federal college-admissions case.

Giannulli was angry because Petrone had questioned the teen’s supposed crew prowess to a rep from the University of Southern California about a month earlier, after the school worker told the counselor that the girl was going to be a rowing recruit — and the counselor had never heard she was involved in the sport.

“I told [the rep] I had no knowledge of involvement in crew and based on what I knew of her video blogging schedule, highly doubted she was involved in crew,” Petron told investigators about the conversation, according to the documents.

When Giannulli got wind of this he allegedly went to the school and went off on Petrone for jeopardizing his daughter’s chance to gain admission to USC.

Petrone informed Giannulli that he had praised his daughter’s video blogging in a recommendation letter to USC, but Giannulli told him he “still did not get it” and as his daughters’ counselor he was supposed to help them, adding that he “knows lots of people.”

After being berated, Petrone checked school records and nope, neither of his daughter’s had every been a member of the crew team. Despite that, with Giannulli making him “visibly nervous,” he later told a USC rep that Giannulli was adamant that his daughter was a crew coxswain.